Fidelity Investment will forge on and develop supporting infrastructure as they aim at hedge funds, pension funds and professional investors despite falling—but recovering digital asset prices. At the same time, Federal Bank, an Indian bank that controls 15 percent of remittance in India will work with Ripple Inc in days ahead.

Still, traders, as well as investors, can feel the reverberation of last year’s bears. While asset prices tanked, it also helped in education, sieving out speculators as true believers built. Of the many that continue to invest and strengthen infrastructure if Fidelity Investment.

According to Tom Jessop, the head of Fidelity Digital Assets, sliding asset prices are not a deterrent of the behemoth’s goal of developing custodial solutions for their institutional grade investors. Already, Fidelity has shown its intent. They are working with hedge funds, pensions, and family offices as they launch complementing custody solutions while simultaneously increasing their “jurisdictional coverage.”

Meanwhile, Federal Bank has acknowledged that it is only natural for them to integrate new solutions and that means partnering with Ripple Inc, a global remittance platform, ahead of the curve. According to the bank’s MD, blockchain based solutions are safe and secure adding that this “partnership will help Federal Bank to explore new corridors where Ripple is aggressively pursuing new partnerships.” 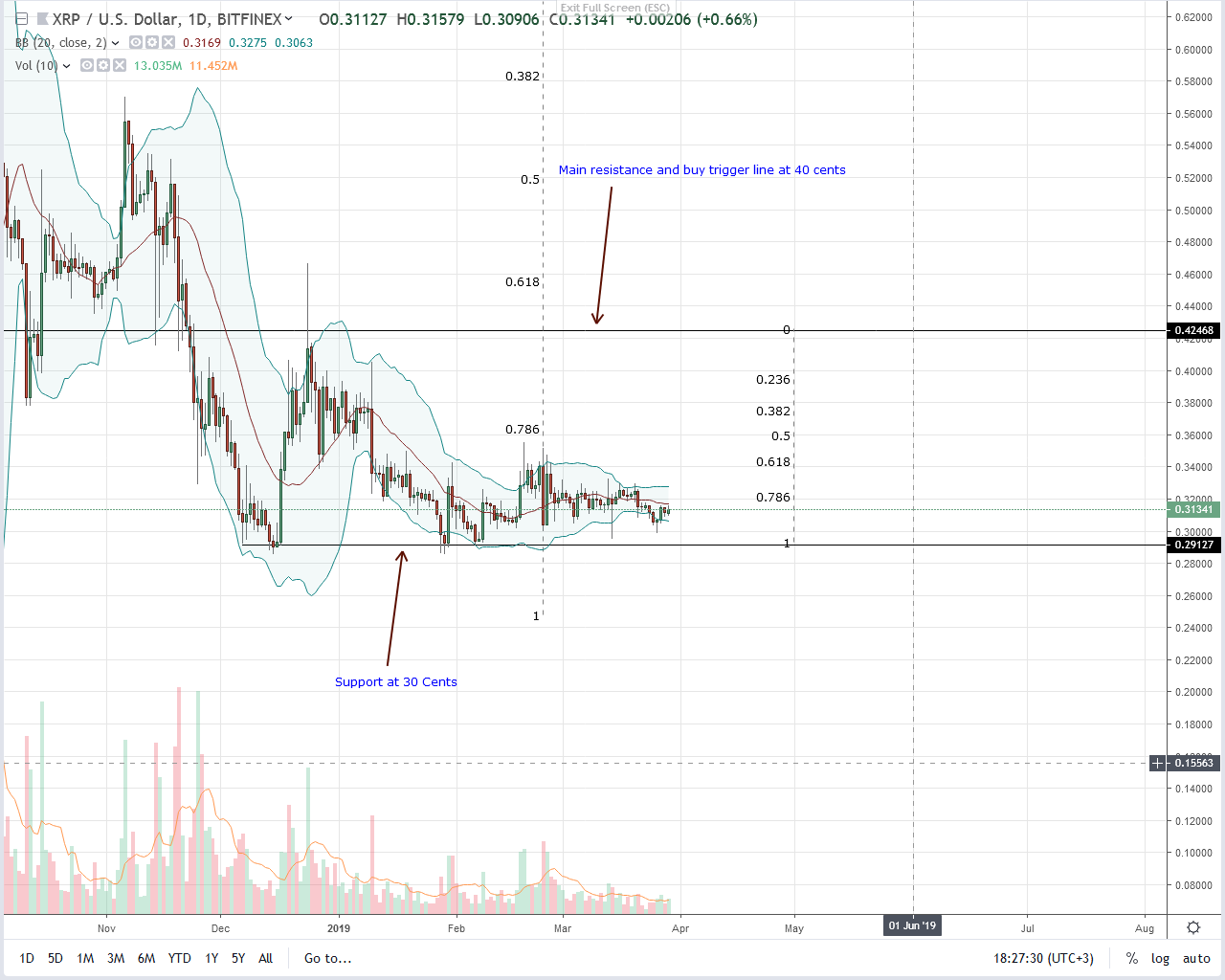 At third, Ripple (XRP) is stable but the worst performer in the top 10. It has to do with the lack of movement in the last three days meaning the three-bar bull reversal pattern of Mar 27 is not valid. From our XRP/USD trade plan, we shall adopt a neutral but bullish stance until after there is a sharp up-thrust above 34 cents. Such a move will trigger participation.

In a bullish breakout pattern, it is likely that the resulting wave will drive prices towards our modest target at 40 cents, a crucial resistance level. Aside from catalyzing demand, the bull breakout above 34 cents will confirm buyers of late Dec 2018 and the double bar bull reversal pattern of Jan 30.

It is likely that Ripple (XRP) prices will edge higher correcting the undervaluation of Mar 26. If that is the case, we expect demand to increase and for a firm trend continuation, breaks above 34 cents or Mar 21 highs must be with high transaction levels exceeding 17 million of Mar 21—our anchor bar or even Feb 24—61 million.