Ripple (XRP) Fundamentals and Technicals Sync, Bulls on the Way

How XRP is classified will determine whether the asset will crumble or soar. Even so, the addition at CoinBase Pro and CoinBase opening up the currency to more than 26 million customers is massive for XRP. From candlestick arrangement, it is likely that prices will edge higher in response.

A decade later and Bitcoin, being the world’s most valuable coin, determines digital asset valuation. Unless otherwise, prices of digital assets are always correlated Bitcoin’s. At some point, the CEO of Ripple Inc said only widespread use of XRP would cause a decoupling.

We are yet to see that happening and as long as BTC is base in almost all crypto exchanges, its fluctuation will continue to impact on XRP prices despite its added liquidity at CoinBase Pro and CoinBase.

There are bribing rumor around this listing. To clear the air, XRP Markets tweeted saying CoinBase support of the third most valuable coin was of their volition and bribing rumors are baseless. The addition at CoinBase is precisely what the community needed, and in a strict exchange where compliance to law and local regulation is a top priority, XRP may be after all a utility—at least in CoinBase evaluation.

All we need is a comment or two from the regulator, the US on whether the users are free to buy a utility in CoinBase. If not, a comment by Block Society, the latest crypto advising firm duly registered with the SEC will help clear the air. 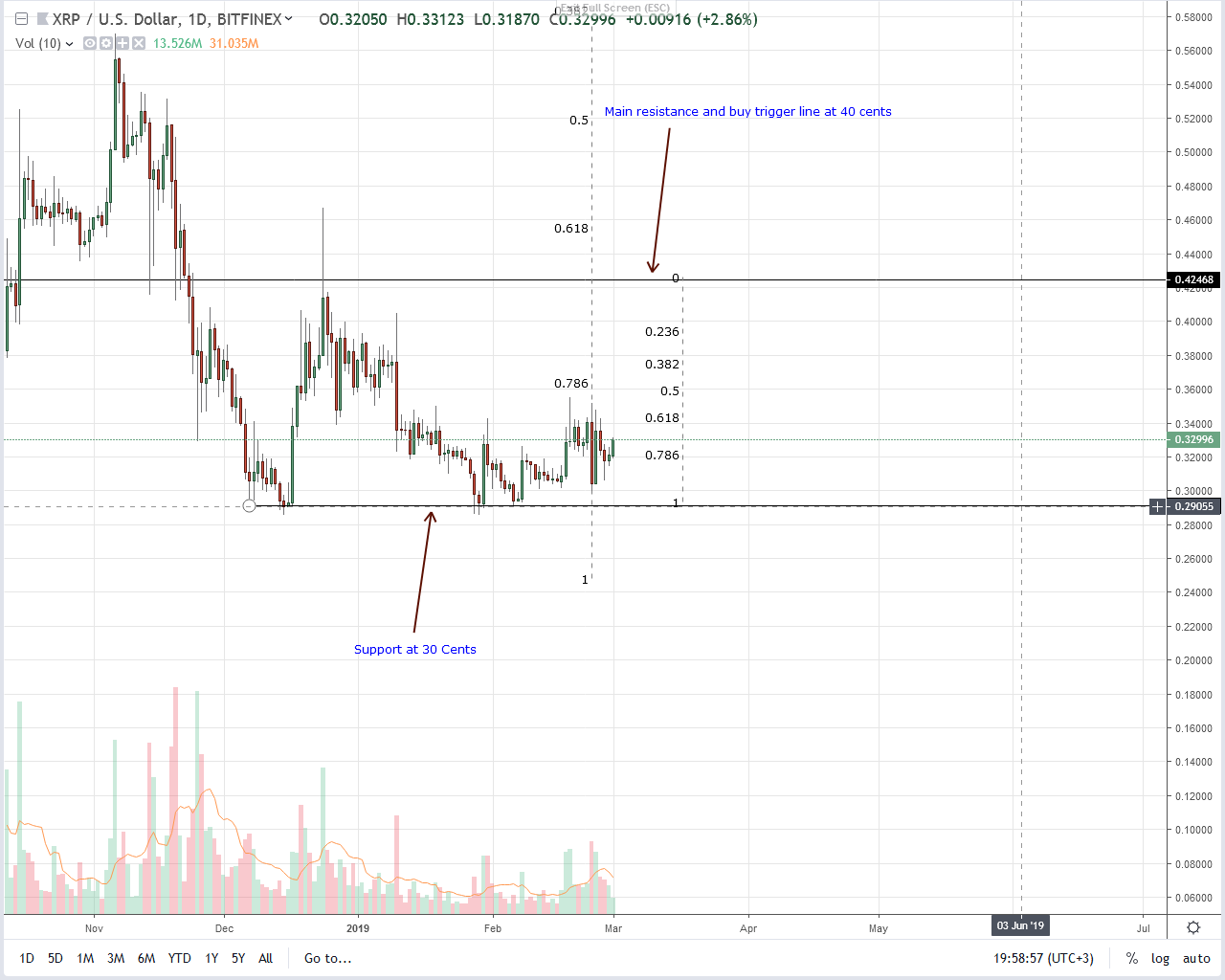 Aside from Binance Coin—up 10.7 percent and Litecoin (LTC)—up 5.6 percent in the last day, XRP performance is modest—up 3.5 percent—considering how dismal price action has been in the last couple of days.

Since our trend is determined and bulls are in control, it is likely that bulls of Feb 25 will spur participation, drawing demand in lower time frames as Ripple (XRP) surge from spot prices. Although we are optimistic of price recoveries, we must also acknowledge that prices are in accumulation. A significant takeaway in this ranging market is swelling volumes as prices find support, rejecting lower lows below 30 cents. Like before, it is after XRP rally above 34 cents is when traders can buy on dips with targets at 40 cents.

Volumes are picking up and are double that of early Feb—at roughly 35 million. Ideally, a break above 34 cents and recent consolidation must be at the back of high trade volumes exceeding 35 million and most importantly those of Feb 24—61 million. Before then, we shall maintain a neutral but bullish outlook.

The post Ripple (XRP) Fundamentals and Technicals Sync, Bulls on the Way appeared first on NewsBTC.

Fundamentals Grow While Bitcoin Price Stagnates, Where Does BTC Go From Here?