Technically, XRP is bullish, but for buy trend continuation, prices must surge above 40 cents as reiterated in our last XRP/USD trade plans. At the moment, sellers appear to be in control and the 5.7 percent drop could trigger dumps in days to come.

Even at second, XRP bulls couldn’t stand the 45-minute flash crash. At spot prices, the coin is down 5.7 percent but up the ranking order after flipping ETH to second. It is what coin supporters want to see, and as long as it remains this way and ETH drop, the coin’s limited volatility—ETH is down 12.5 percent—will attract capital just like it did back in Nov 2018. However, although this bull squeeze could end up being a blessing for risk-averse traders, any drop below 34 cents and 30 cents could shift momentum from net bullish to bearish.

Estonia’s DX Exchange choice of digitizing some high-value NASDAQ’s stocks like Facebook, Apple and Tesla was a “proof of concept.” Because of this exchange, it is now possible to trade stock market derivatives. Ripple’s XRP is available for trade. However, there are more opportunities now that BCG Group has made known their intentions of creating eMetals representing real-world assets as Gold or Silver secured by smart contracts and payable through cryptocurrencies.

Meanwhile, Santander’s One Pay FX is proving to be cheaper and more efficient making the bank competitive. In a conference, the Ana Patricia Botín-Sanz, the Group Executive Chairman of the bank said she the “devil is in the details,” and there has been real reciprocity because users can send and receive funds while on the go. 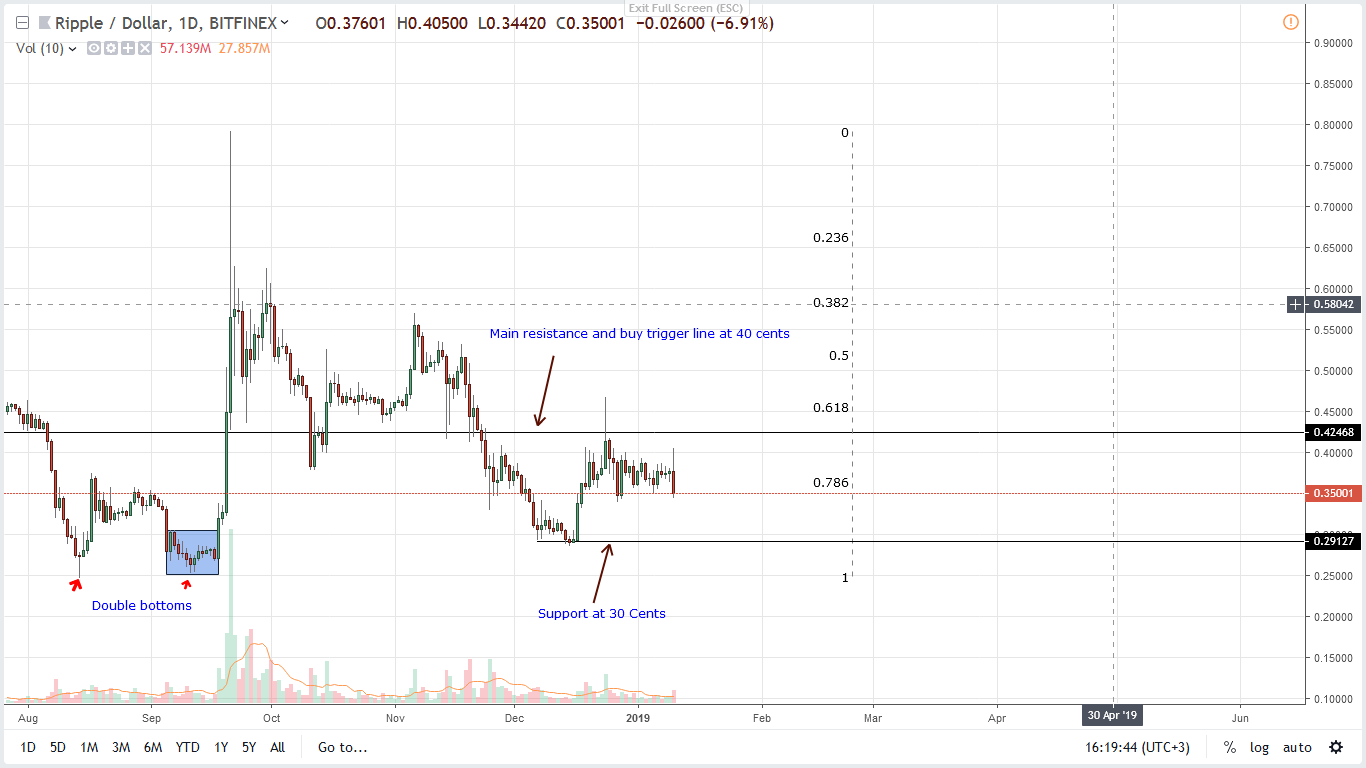 At spot rates, XRP is the second most valuable coin the space with a market cap of $14.03 billion. That is despite sinking 5.7 percent in the last day. From candlestick arrangement, it is likely that bears will drive prices below Dec 28 lows of 34 cents.

Advising this is the increasing trading volumes—56 million. It is 10 million more than those of Dec 28 bull bar and although volumes are lower than that of Dec 24—123 million, the simple fact that volumes are above daily averages and accompanying trade range wider than usual after days of consolidation is negative for XRP’s value. If prices drop below 34 cents, it is likely that sellers will drive XRP price towards 30 cents by mid-next week.

As aforementioned, bear volumes are increasing. After 13 days of consolidation, this high-volume flash crash may be an undesirable bear breakout. However, drops below 34 cents will reaffirm this stand.