As one of the most secure exchange, CoinBase is not taking chances. Their chief information security officer now reveals that the exchange’s hot wallet insurance policy covers $255 million just in case of losses. That has been the state since late 2013. In the meantime, Litecoin (LTC) is up 47 percent, and buyers are aiming at $90.

CoinBase, the US exchange valued at over $8 billion is unique because it is hacker—proof—no recorded breach since launch. They assure clients that their priority is security “for Your Peace of Mind.” To that end, the team tasked with storing user assets has “98 percent of customer funds in cold wallets.” Additionally, CoinBase “distribute Bitcoin drives and paper backups geographically in safe deposit boxes and vaults around the world.”

According to Philip Martin, the chief information security officer at CoinBase, the exchange has taken upon themselves to insure their hot wallets. The plan which CoinBase has been subscribing to since Nov 2013 after purchasing it from Lloyd’s of London covers up-to $255 million just in case there is an unfortunate hack:

“We currently hold a hot wallet policy with a $255 million limit placed by Lloyd’s registered broker Aon and sourced from a global group of US and UK insurance companies, including certain Lloyd’s of London syndicates. The rationale has remained the same the entire time: if the worst happens and CoinBase loses customer funds, customers deserve certainty that they will be made whole. Data is clear that today, the most likely consumer loss scenario for any cryptocurrency company is hot wallet loss due to hacking.” 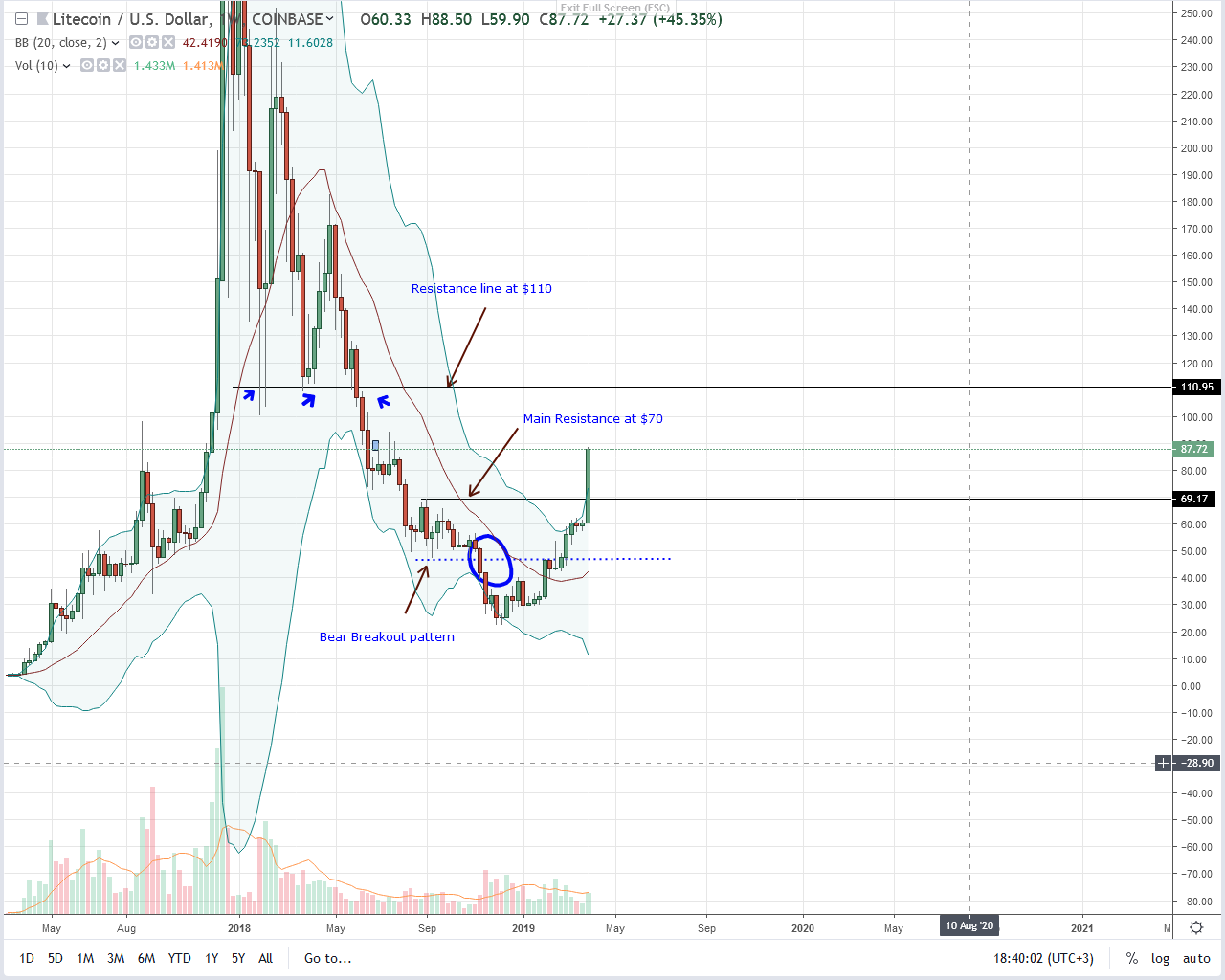 At fifth, Litecoin (LTC) has a market cap of $5,293million, adding 47 percent in the last week. Aside from the magnifier effect of Bitcoin, fundamental factors are fueling this rally. Note that LTC surges began after MimbleWimble announcement. That saw Litecoin increase in the first week of February and what we have now is a buildup of previous buy momentum.

At the moment, Litecoin is trading within a bullish breakout pattern. Because of yesterday’s surge, traders should search for buying opportunities with targets at $90. Regardless, we expect a correction of yesterday’s stretch meaning there is likelihood that LTC may retest $70-$75 before bulls resume their climb to $90.

Volumes are high and confirming week ending Mar 10—1.993 million are this week’s equally high participation level that will likely close above 2 million. Because of our skew, there is the option of entering in the 4HR chart, and with every volume spike driving prices higher, savvy traders should capitalize as they trade as above.

The post Is Litecoin (LTC) Up Because of FOMO? Adds $2.7 Billion in 18 Hours appeared first on NewsBTC.

Bitcoin Trades For Over $10,000 On Binance Stable Coin Trading Pair