Ethereum (ETH) A Strong Buy According to Joseph Lubin of Consensys

Weeks after retrenching staff, Consensys CEO is confident that ETH prices will surge 1000X. This is partly thanks to the launching of Ethereum 2.0 and prospects of dealing with scalability. Therefore, that means there is a huge Ethereum (ETH) undervaluation.

Consensys is the Brooklyn-based software-production studio that is backed by Joseph Lubin. Joseph is one of the top contributors of Ethereum. Months after announcing plans of the studio’s “re-focusing of their priorities” at the back of dropping asset prices and a biting crypto winter, Joseph believes that ETH prices will surge 1000X in the next two years.

With an eager audience during the ConsenSysSXSW 2019 in Austin, the tech leader is banking on Ethereum 2.0 and the development of layer 2 scalability solutions that will see Ethereum platform efficiently handle the influx of transactions without sacrificing speed or hiking fees:

“Ethereum 2.0 is launching soon. We have eight teams working currently on Phase 0 of the four phases of the roadmap. We will further develop the base layer of the Layer 2 expansion solution, which will be in the next 18- at least 1000 times in 24 months. Once this completes, Ethereum will continue to expand. Since the start of the ecosystem in 2009, Ethereum has seen many incredible rises in the price of the tokens followed by many corrections. One of the significant corrections was done in 2018, which was 5,000-times more valuable than when ETH was initially launched.” 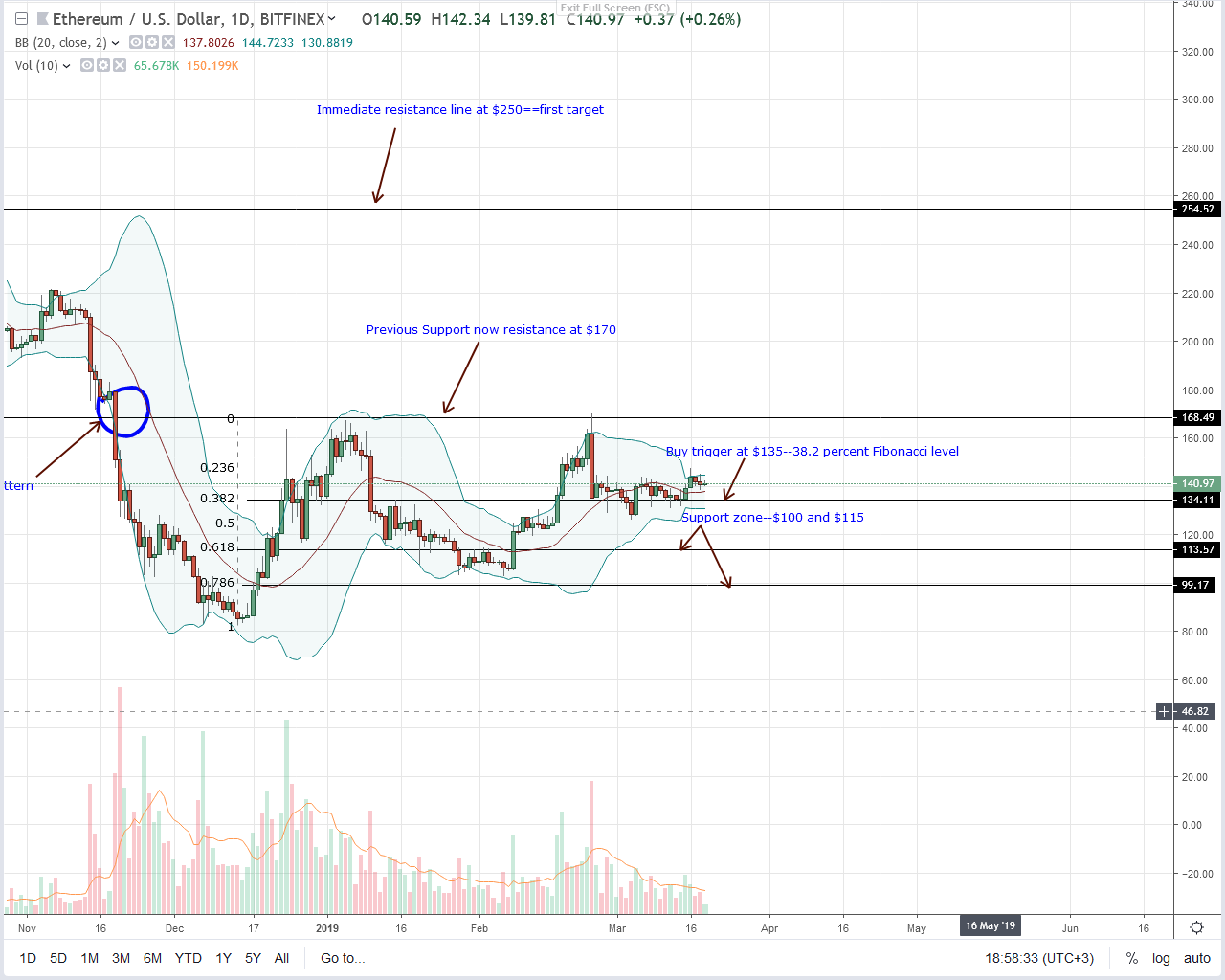 Meanwhile, Ethereum prices are stagnating above $135 but up four percent from last week’s close. From candlestick arrangement, buyers are in charge and trading within a bullish breakout pattern with immediate supports at $135.

Even so, we must realize that sellers are overly in charge especially if we break down the price from a top-down approach. Note that $170, though more than $30 away is a vital resistance and previous support. As reiterated in previous ETH/USD trade plan, price surges above $170 should have strong bases.

That, therefore, means consolidation above Mar 5 highs and oscillation within Mar 15-16 high lows. Any drop below $135 nullifies this trade plan and could catalyze a sell-off towards $100, a psychological round number.

Flat-lining prices equate to low participation levels, and that is evident from the chart. From Mar 5 when decent volumes—302k versus 296k, accompanied prices, participation averages have dropped to 160k hinting of low demand. Moving on and as laid out in prior trade plans, gains above $150 confirming bulls of Mar 5 must be with high volumes exceeding 330k or even 1 million of Feb 24.

The post Ethereum (ETH) A Strong Buy According to Joseph Lubin of Consensys appeared first on NewsBTC.

Crypto Analyst: Do Or Die For Bitcoin As Downtrend Resistance Nears Closer