For the longest time, the developers behind the Ethereum (ETH) blockchain have had their eyes set on Proof of Stake (PoS). Serenity, as core developers call the iteration of their brainchild based on staking rather than mining, is slated to come to fruition over the coming years.

But, some, including those predisposed to be enamored Bitcoin’s relatively simple Proof of Work (PoW) mechanism, which harnesses deflation, difficulty adjustments, and the sheer power of computational processes, have claimed that this alternative consensus medium may post all but solid results.

Related Reading: Crypto Developments Aplenty at Devcon4, Ethereum 2.0 Among Them

Staking On Ethereum May Not Be Economically Viable

After a number of failed attempts, due to bugs and consensus misalignment, the fabled Constantinople blockchain upgrade went live last week. Constantinople, for those who missed the memo, introduced changes to Ethereum’s virtual machine that reduces smart contract gas consumption (lower fees), along with a -33% shift in how much Ether is issued each block. Although this blockchain upgrade had roots in bolstering the short-term scalability prospects of Ethereum, Constantinople moves the project one step closer to the advent of Serenity.

0/ We’re excited to release our “Entering The Ethereum’ report. Read it in full here! https://t.co/14Dg1vWKzz

But, the New York-based Delphi Digital recently expressed concerns about the viability of staking, especially in the context of current market conditions, which have drastically depressed the value of ETH.

The research boutique, which recently joined hands with 51Percent and accepted Bitcoin bull Anthony Pompliano as a board member, broke down how the planned PoS model, especially the cryptoeconomics facet, could pan out in real life.

Delphi’s team, headed by Tom Shaughnessy, note that the proposed yields offered through staking “look low,” even without factoring in operational expenses that come with running a server. The proposed yields offered to validators, which will be equivalent to miners on the Serenity chain, will be 18.19% APR at most — this being the case only if there is 5,000,000 Ether staked, even as transaction fees spike through the roof. More conservatively and representative of real life, validator yields will likely be well under 5%, possibly even as low as 2% to 3%. On the matter of the economic sustainability of these returns, the researchers remarked:

“It’s clear that not only will network fees (gas spent) be the primary driver of higher validator yields, but that the reward structure is not economically sustainable without significant growth in those fees.”

The American group then goes on to break down an Ethereum validator’s net yield, factoring in the expense of running hardware or a cloud server (which introduces centralization) for validation. They note that at current prices levels, staking will be wildly unprofitable, maybe even more so than the levels that capitulating Bitcoin miners faced in December of 2018. Mythos Capital founder Ryan Adams notes that per Delphi’s chart, at $100 per ETH (effectively current levels) and with 400 ETH in daily network fees, the annual yield would be -26%. Ouch. 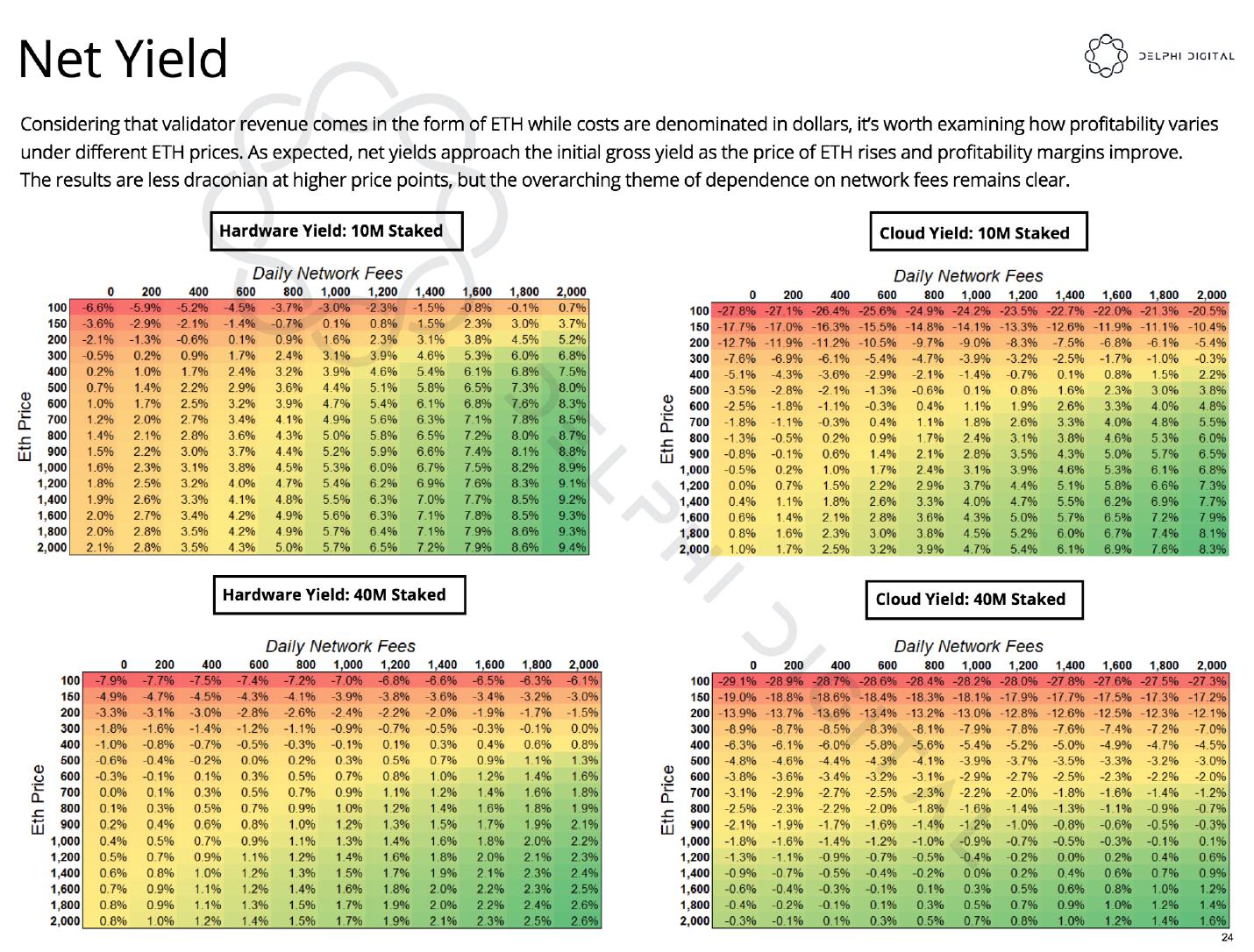 In a number of other scenarios laid out in the chart, prospects for validators seemed just as dire. Save for scenarios where Ether is booming and network fees are high, which seems unlikely considering the moves to decrease gas usage across the board, validators would be losing their hard earned money in exchange for processing Ethereum transactions. Thus, Delphi determined:

“We absolutely believe that continued Ethereum adoption and building on the platform will help the fee market develop, but it becomes a bit of a chicken or the egg situation. A diversified and profitable validator network is crucial for the security and the longevity of the network, but that’s unattainable under the currently proposed specs without significant network fees.”

As Delphi was open to criticism in response to their caution, commentators quickly threw their hats in on the matter. Even Vitalik Buterin, the Russian-Canadian coder extraordinaire behind the project, had something to say on the matter. Buterin, who has arguably become Ethereum’s version of Satoshi Nakamoto, notes that the harrowing case that Delphi laid out is “very unlikely to be true.”

That seems very unlikely to be true. That implies that 1m ETH/year rewards cannot pay for a few hundred times the ethereum's current blockchain load times a ~256 overhead factor. The latter cost is comparable to the operation of the current chain…

He claims that such statistics imply that one million Ether issued each year “cannot pay for a few hundred times the Ethereum’s current blockchain load times at a ~256 overhead factor.” Buterin adds that he isn’t comfortable with making a “‘moon or bust'” shot, as he sees worlds where Ether will remain at $100 but could claim that #1 seat on the cryptocurrency rankings, meaning that Serenity will need to operate at such low (even negative) margins.

But Delphi was adamant that changes should be made to the validator payout structure, as they feared that a future collapse in Ether based on a PoS-backed chain could create a negative feedback loop, thus producing an environment that is far from secure. They specifically drew attention to a model where early revenues on Serenity would be centered around block rewards, rather than networks fees. They claim that this will give a “significant buffer” for validators, as the fee market will need to develop over a number of years.

Fidelity Bitcoin Custody Launched, Is This The End of Personal Integrity?