Heightened cryptocurrency wallet activity could have triggered recent price rally. Analytical firm says that only 10 percent of Bitcoin wallets were inactive in the last two weeks leading up to the price surge. In other news, Canada Bitcoin (BTC) forfeiture is the largest in history coming at the time when Bitcoin (BTC) is bottoming up, registering strong gains in the right direction.

In the last couple of days, there has been much debate over the real reason to the recent price surge. One of the earlier theories pins the surge to a successful April Fool’s day prank. However, that argument no longer holds. Instead, most analysts suggest that the surge was purely technical.

Other explanations by Bloomberg notes that just before the surge, the number of active Bitcoin wallets shot. Drawing their observations from an analytical firm, Flipside Crypto, the number of active crypto wallets from average users rose from March 15 which many believe supported prices as confidence rose in tandem.

Only 10% of #bitcoin wallets have been inactive since March 15th. Movements from smaller investors were a leading indicator for the recent market bull run. More from us in @Bloomberg: https://t.co/NtgrXEViOL #crypto #market #intelligence

Meanwhile, in Canada, a Toronto judge has ruled that an online drug dealer must forfeit $1.4 Million Bitcoin holdings. This becomes the largest forfeiture ever in the country. Though the convict, Matthew Phan, tried to appeal the decision claiming he had not acquired his 281.41 BTC through drug dealing, his appeal wasn’t successful. 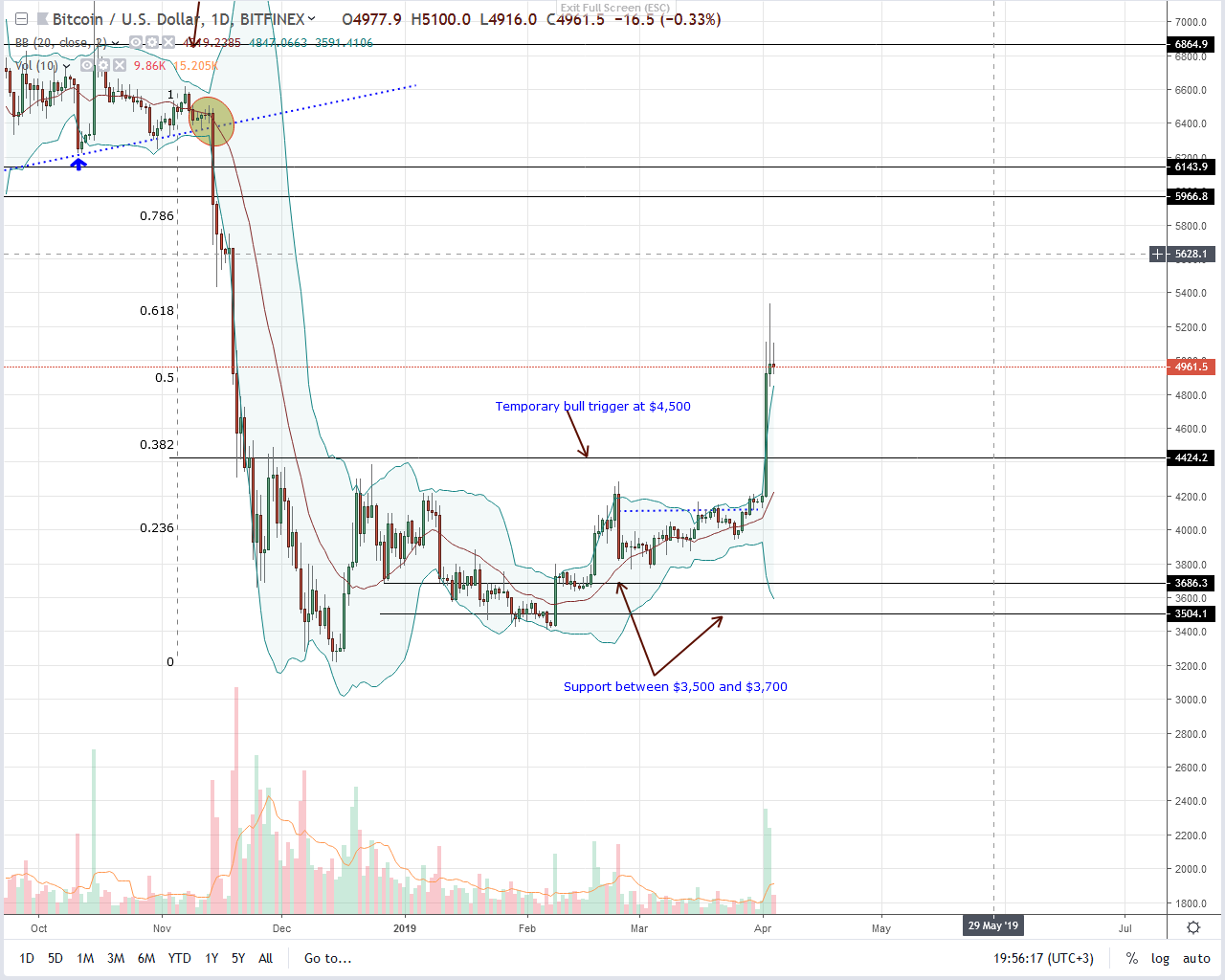 Even though momentum is waning, Bitcoin (BTC) bulls are firm and satisfactorily trending above $4,500. To that end, Bitcoin is up 22 percent in the last week at the time of press.

All the same, Bitcoin rise has been beneficial for the market. Therefore, in a bull breakout pattern, prices are poised to register gains in days ahead. However, traders should proceed with caution despite the recent uptick in activity. Notice that Bitcoin bull bars are banding along the upper BB but in doing so, Apr 3 bar did close above the upper BB.

This pattern either means BTC is overvalued, and could drop back to the middle BB or the coin’s buy momentum is too strong. Either way, there is an option of loading up on pullbacks in lower time frames. If buyers fail to maintain prices at these levels and BTC drop below Apr 3 lows, then risk-off traders should exit their longs and wait for better entries at around $4,500–$700 zone in line with yesterday’s BTC/USD trade plan. The correction will allow momentum build up and would sustain the break-out pattern via retests.

After two days of stellar performance, Bitcoin (BTC) momentum is waning as volumes drop. On Apr 2, BTC volumes stood at 54k when averages were at 6k. That was almost double those of Feb 18—37k and Feb 24—36k confirming the double-bar bull pattern of Mar4-5. Because this is a bull breakout pattern and a correction imminent, ideal buy zone is as mentioned with buy signal being a spike in smaller time frames.

Bitcoin is the Hottest Trend on China’s Search Engine, Will Capital Flow In?