Yes, Bitcoin (BTC) Whales Are In, a $100.3 Million Buy Order is Just the Beginning

The crypto market is raving, posting double-digit gains and poised for now thanks to a $100 million, single buy order trigger identified by blockchain sleuths. Because of favorable candlestick arrangement, Bitcoin is likely to edge higher but could first correct to $4,500—700 zone before trend continuation.

Good news is Bitcoin (BTC) is up 26 percent in the last week, hauling periphery altcoins. Thus far, it is an impressive performance and despite all the skepticism around the source of this “pump,” technical as well as fundamental factors are supportive of BTC buyers.

While it is likely that yesterday’s and today’s rally could cause an over-extension forcing a correction, there is an opportunity for traders. There are more than two reasons why BTC and the crypto market could inch higher in days ahead.

Apart from politics around Brexit, there is infrastructure development and improving education that is gradually changing the narrative around Bitcoin and crypto in general. A major takeaway in all this is the entry of the so-called “whales.”

According to Reuters, yesterday’s surge was a result of “a single order that has been algorithmically-managed across these three venues, of around 20,000 BTC” as noted by Oliver von Landsberg-Sadie, chief executive of cryptocurrency firm BCB Group. Oliver goes on to say that “If you look at the volumes on each of those three exchanges – there were in-concert, synchronized, units of volume of around 7,000 BTC in an hour.” If anything, this is a tell-tale sign that there is improving market confidence and something “huge” is on the cards a few days after CBoE delisted their XBT Futures. 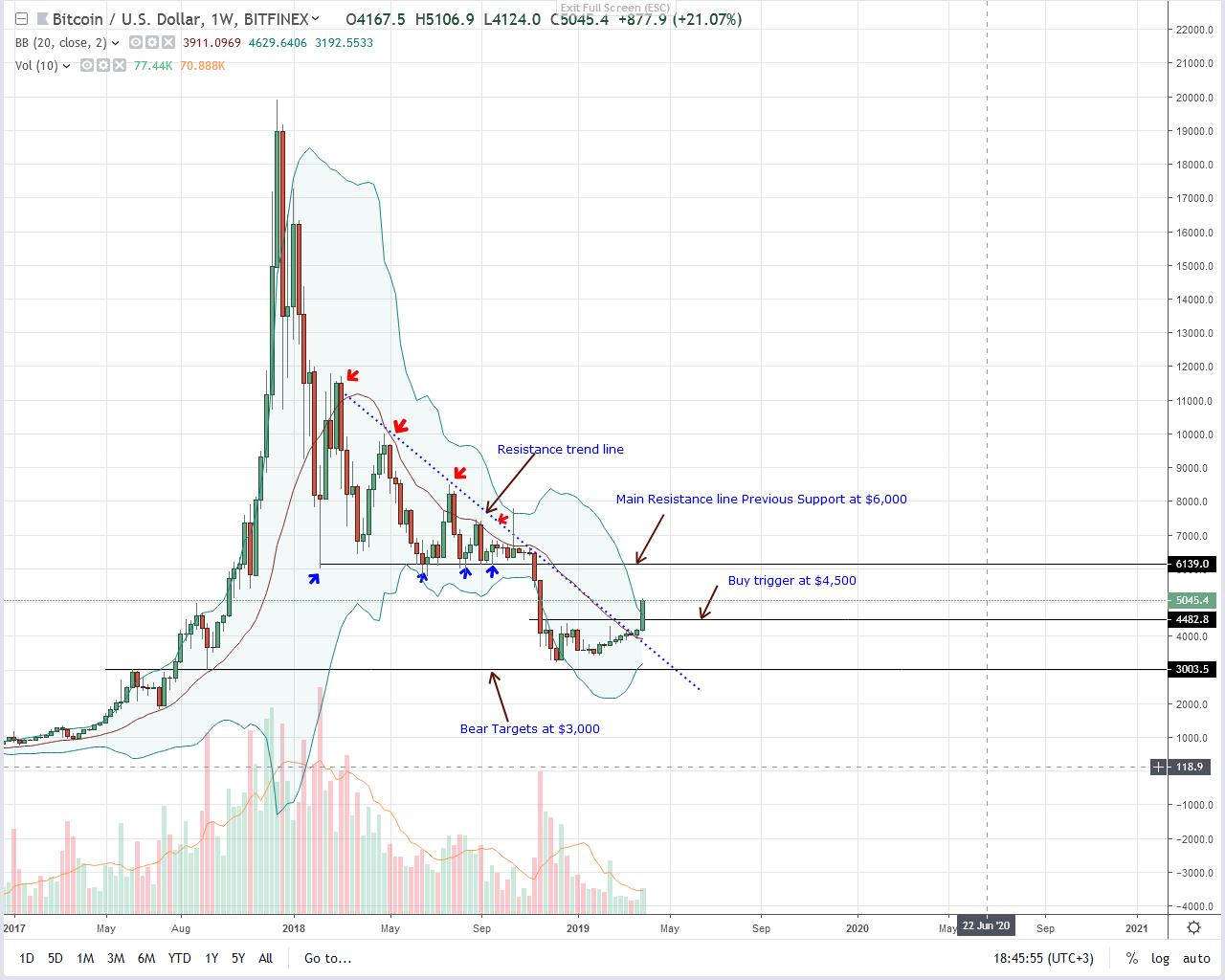 For a better perspective, we shall have a look at the weekly chart. Already, BTC bulls are in control, up 26 percent as aforementioned. However, it is the pace that is interesting. Visibly, volumes are up driving prices.

As a result of this, Bitcoin prices for the second time this year are firm above the 5-month resistance trend line in line with our previous BTC/USD trade plan. Therefore, to sync with this shift of trend, traders should fine-tune entries in smaller time frames—preferably not at spot rates as prices are pretty unstable, but at around the 61.8 to 38.2 percent Fibonacci retracement levels of this week’s high-low and aim for $5,800–$6,000 zone.

Compared to last week, Bitcoin volumes have doubled revealing demand. Since all our trading conditions are valid and there is participation, traders should search for long entries.

The post Yes, Bitcoin (BTC) Whales Are In, a $100.3 Million Buy Order is Just the Beginning appeared first on NewsBTC.