Home Blockchain NewsBitcoin News Will the Binance Move into Aussie Newsagents be a Boon for Crypto Adoption?
Bitcoin News

Will the Binance Move into Aussie Newsagents be a Boon for Crypto Adoption?

Global crypto exchange giant Binance has announced that it will be helping to facilitate the sale of Bitcoin in Australia at real-world locations. The trading venue stated that crypto users would be able to get exposure to the number one digital asset in more than 1,300 newsagents across the country.

The news highlights the exchange’s commitment to expanding the number of fiat gateways to the cryptocurrency economy. However, details of the purchase process might mean that the service is used less people than many of those braying for the fall of government-issued currencies would like.

The new service being launched by the global exchange giant will be called Binance Lite. It represents first time the hugely successful yet relatively new cryptocurrency trading venue has managed to open a fiat-to-cryptocurrency service in the nation of Australia.

According to a report in The Next Web, the exchange’s Chief Finance Officer, Wei Zhou, stated the following of the its latest move:

The decision by Binance to work with Australian newsagents has a lot in common with the plan, announced last year, to allow French tobacco shops to sell vouchers for Bitcoin purchases, much like they do for pay-as-you-go mobile phone top ups.

However, in order to remain compliant with Australia’s financial regulations, those wishing to use Binance Lite must first register for the service. This requires a full account verification process (KYC/AML) meaning that the service will be less appealing to those wishing to preserve financial privacy.

Once this step is complete, the customer can buy Bitcoin at any one of more than 1,300 newsagents across the nation. A full map of locations offering Binance Lite, provided by Binance Labs, is featured below: 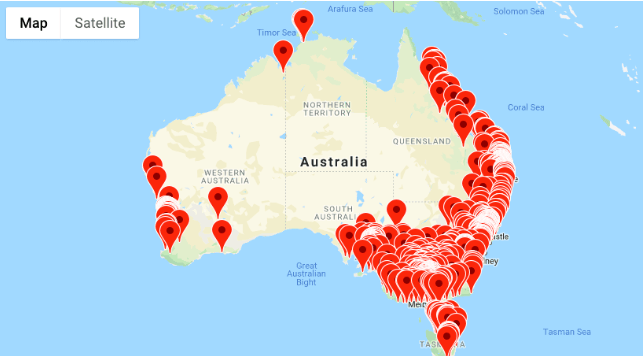 As one of the largest trading venues in the cryptocurrency industry, Binance has been right at the forefront of promoting cryptocurrency adoption around the world. Already in 2019, the now-Malta-based exchange has announced a couple of initiatives to help make taking up positions in crypto easier than ever.

The first of these was the news that the main Binance global exchange would begin to accept credit card payments in January. Such an extension to accepted payment methods is obviously a net positive for the space since it offers people an additional way to buy digital assets. However, investing in Bitcoin, Ether, Binance Coin, or any other highly volatile and speculative asset on credit is certainly not recommended.

Elsewhere, Binance is working towards delivering on one of the most often-repeated, unofficial goals of Bitcoin – to bank the unbanked. The exchange opened Binance Uganda in October of last year. It has since seen massive numbers of accounts opened, which is certainly encouraging for adoption on the largely-unserved-by-crypto African continent.

According to Medium post, Binance also has plans to open a fiat-to-cryptocurrency exchange in Singapore at a for-now undisclosed date.

The post Will the Binance Move into Aussie Newsagents be a Boon for Crypto Adoption? appeared first on NewsBTC.

The Ripple Killer? IBM in Talks with Two Major US Banks to Create Cryptocurrencies

Crypto Analyst: Do Or Die For Bitcoin As Downtrend Resistance Nears Closer