Will Ripple (XRP) Drop to 34 Cents? xRapid and Building Determiners

Chris Larsen is part of the IMF Advisory Board, remains the co-founder of Ripple and recently donated $25 million in XRP at the San Francisco State University. Whether that will elevate Ripple Inc profile, we are not yet visible but what is clear is that Ripple (XRP) buyers are back.

Not surprising, Ripple is actively building and on the other, they are striking partnerships, and financial institutions can leverage on their network for cost cuttings and efficiency. And this is understandable. As a network that seeks to dislodge the incumbent in SWIFT, it must go the extra mile, and that means being aggressive in their negotiation, on-boarding new members and be regulatory compliant.

They have been successful in the first two, and now that some of Ripple’s key members as Chris Larsen are working with global players like the IMF, we expect the company to prioritize compliance over everything else.

After all, for the adoption of xRapid, a solution that makes transactions faster and more efficient, more so after the launch of Cobalt, there should be clarification on whether XRP is a utility or an investment contract.

Last week and as a show of good will, Chris Larsen and his wife donated $25 million worth of XRP at the San Francisco State University, funding which will go towards supporting students as they become “changemakers of local and global entrepreneurial and fintech ecosystems.” 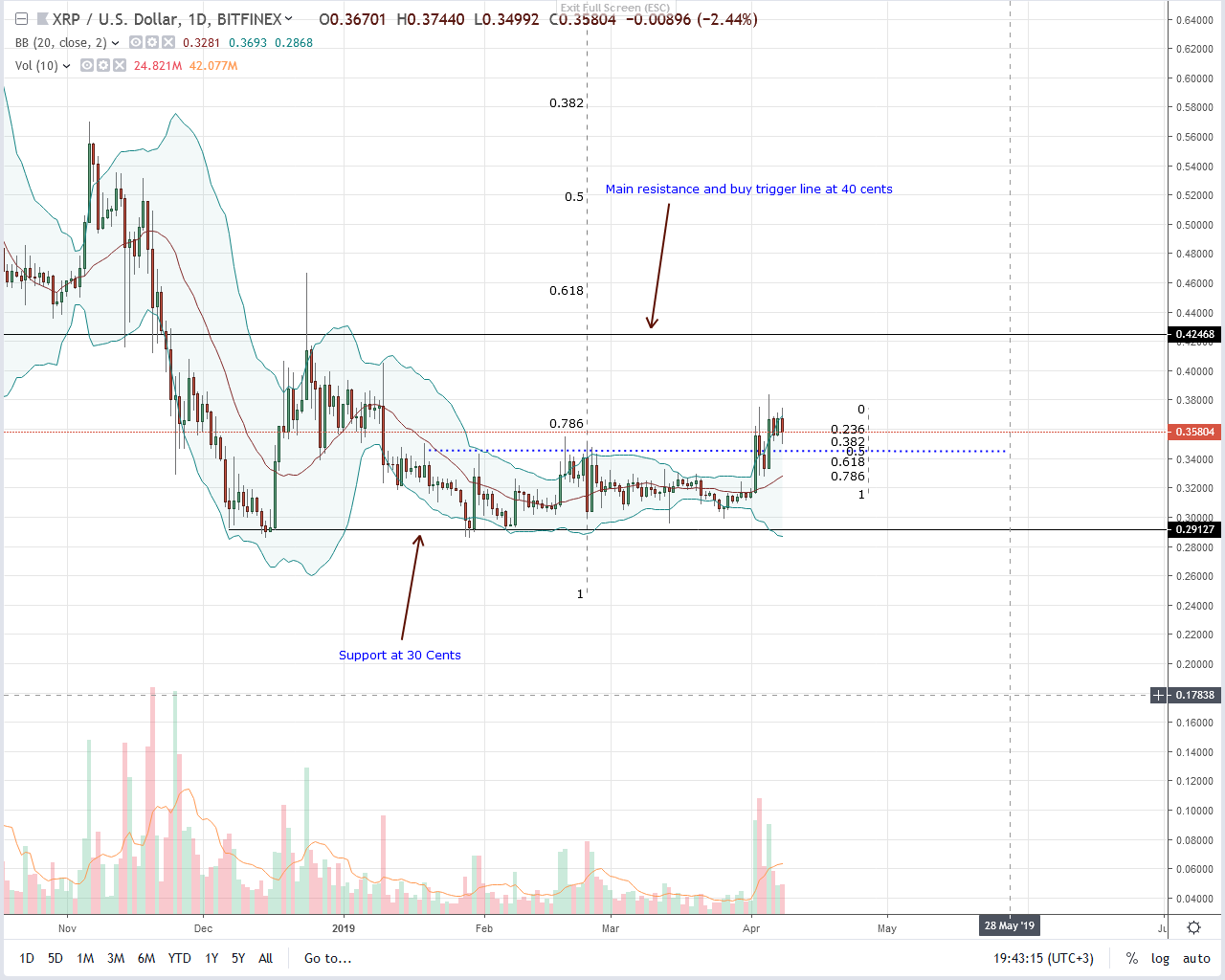 Thus far, Ripple (XRP)’s performance is average, adding 14 percent in the last week. However, we expect XRP bulls to flow in now that the third most valuable asset is trading within a bullish breakout pattern against the USD. All this is visible from candlestick arrangements.

Not only are bulls back trading above the 61.8 percent Fibonacci retracement level of Dec 2018 high low but the coin’s direct correlation with Bitcoin had a lifting effect on the currency. Even so, XRP bulls have much ground to cover, and it is after when prices rally above 40 cents breaking out of the five-month consolidation is when risk-averse traders can get in, ramp up in smaller time frames and even aim at 60 cents in line with our last XRP/USD trade plan.

Before then, risk off traders can search for dips with targets at 40 cents.

Participation is medium, and despite volumes surging 4X from Mar 26 on Apr 5, bulls are struggling to print higher highs. However, that doesn’t mean buyers are in control.

Any break above 40 cents must be with an uptick in volumes exceeding 79 million of Apr 2. That will confirm buy pressure of Jan 30 and late Sep 2018 besides reaffirming the strength of 30 cents as a reliable support line.

The post Will Ripple (XRP) Drop to 34 Cents? xRapid and Building Determiners appeared first on NewsBTC.