Trump’s plan of imposing financial sanctions on Maduro and other Venezuela elites could backfire affecting ordinary citizens. However, it justifies the need of shifting to a decentralized ledger that is global and resistant to local politics. Ripple’s XRP ledger is one of them.

The only way of heaping pressure on President Maduro and his cronies is if there are stiff financial measures that will help dry his taps. In a presidential crisis that has brought much suffering to Venezuelans, the Trump Administration is considering imposing sanctions on Venezuela.

As a result, Visa, MasterCard, and other US companies won’t process transactions in Venezuela tightening the noose on the government’s finances. These financial sanctions are aimed at influential Maduro supporters and are fashioned similarly to those imposed on Iran and Syria according to a breakdown from a senior official conversant with Trump’s plans.

“The purpose of these sanctions is to continue to deprive the illegitimate Maduro regime of access to funds and deny their ability to continue stealing from the Venezuelan people. These sanctions block state-owned financial institutions’ access to the international financial system, including credit card providers as well as SWIFT, the Belgium-based financial messaging service.”

The US is leveraging on the existing financial oligopoly to impose sanctions which often hurt the commoner. Even if these sanctions target the elite, they are wealthy enough to by-pass them. The move, if it comes to fruition, highlights the need of shifting to a global ledger immune to local politics. 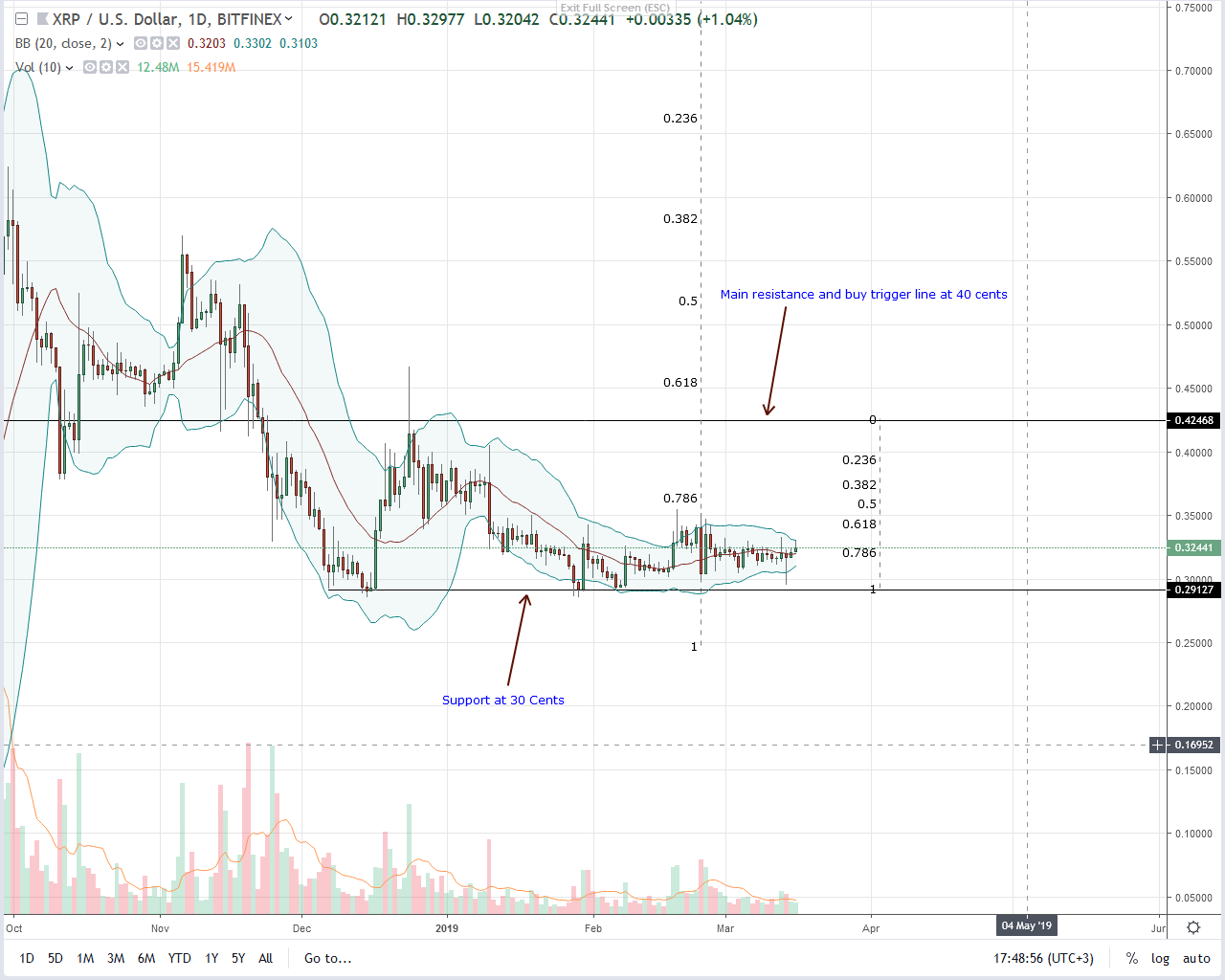 Even with increasing demand, Ripple (XRP) prices are ranging and inside a 4 cents zone. Like we have mentioned before, we expect a strong breakout now that prices have been oscillating within the 30 cents—34 cents region. Since buyers are in charge and 30 cents is stable support, the only time traders can begin loading up is once there is a definite close above 34 cents. Accompanying this break should be high transaction volumes forming the base of our spring towards 60 cents—Nov 2018 highs.

After Feb 24, Ripple (XRP) volumes dropped. By Mar 15 close, average volumes stood at 16.1 million. This pales in comparison with 30 million averages of Feb 24. It is likely that flat-lining asset prices discouraged participation. Nonetheless, we are bullish, and any rally above 34 cents must have high transaction volumes exceeding 65 million.