The Tron Foundation may be hard at work, but market dynamics are exerting pressure on TRX. It is down 8.5 percent in the last week despite Roy Liu signing an MoU with two of South Korea’s leading gaming associations.

Without a shadow of a doubt, Tron Foundation is ambitious. Evidence of their activity driving towards their objectives of decentralizing the web and correcting what many call the old sins of the World Wide Web is all over the place. We can start with BitTorrent and BTT ICO. Not only was it an overwhelming success but the TRC-10 token valuation is up meaning the Foundation is in green.

That’s not all. Seventy-five days after the announcement of the Tron Arcade, there is movement. Roy Liu, who is the Business Development Manager at Tron, has signed an MoU with two gaming associations–Korea Mobile Game Association (KMGA) and the Korea Blockchain Contents Association (KBCCA) — in South Korea.

Apart from the Kimchi Premium and widespread cryptocurrency adoption, the SE Asia country is the world’s fourth largest gaming market. According to GamesIndustry.biz, the global gaming industry generated $134.9 billion in 2018, a 10.9 percent increase from 200. In South Korea, gamers spent $5.6 billion in 2018 alone. As such, it is evident that Tron wants to get a foothold and be a preferred platform in the ever-expanding gaming market. After all, the objective of Tron Arcade is to:

“Empower developers to create and execute on their ideas, to introduce new games and content into an autonomous ecosystem, and to build a strong community of content and entertainment.” 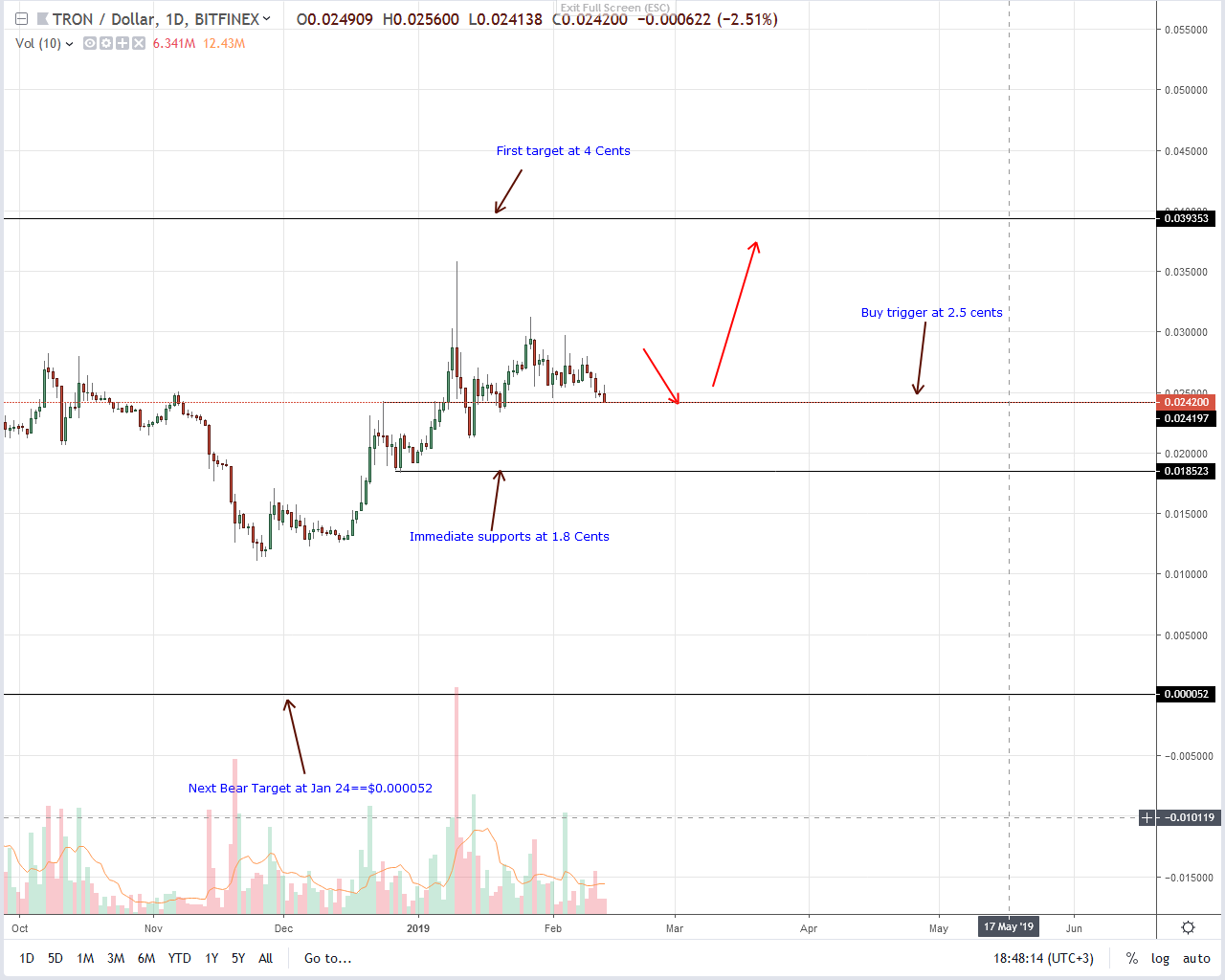 Like yesterday, TRX prices are no better. Despite our positive outlook, the coin is under immense pressure. In the last week, for example, the currency is down 8.5 percent.

With buyers failing to generate momentum and recoup losses, the gap between Stellar and TRX is narrowing. As I write this, the difference stands at $113 million meaning further breakdown could see a possible XLM—TRX flip.

All the same, we maintain a bullish projection, expecting prices to recover and align with pre-BTT ICO bulls set in motion in mid-Dec 2018. From our analysis, any break below 2.3 cents could see TRX prices slide to 2.1 cents. That will automatically take us out of this trade.

However, if prices surge above 3.1 cents snapping to trend and realigning with bulls of Jan 14 and 21, our TRX/USD trade plan will be on course, and prices will easily print and close above 3.1 cents.

There is a divergence, volumes are increasing, but prices are dumping. If there is a breakout below 2.3 cents, sellers would be in charge. Confirming this shift of momentum would be high volumes exceeding those of Feb 4—42 million and recent averages of 12 million.