Gambling and related betting dApps are driving blockchain and crypto adoption according to a report by dApp tracker. Although most dApps do launch from Ethereum, activity is visible in Tron and EOS. Regardless, TRX is down 10.6 percent after gapping down in the Asian session.

Blockchain and cryptocurrency are not only growing, but the tech is maturing. If anything, it appears that last year’s winter did solidify the resolve of developers, platform founders sieving out speculators. The market may be bottoming up, and as always, a recovery means renewed interest and the cycle may begin once more. As usual the market being cyclic, studies now show that these retailers are drawn more to gambling dApps of which some of which are launching from Tron—which is faster and scalable than Ethereum.

A report by Dapp.com reveals that gambling and similar betting apps quickly jumping ship, preferring blockchain and their benefits driving adoption as a result. It also goes on to say that despite this misconception that Tron dominates, more than half of all dApps launched in Q1 2019, were from Ethereum.

However, although most did run from Ethereum, they are not the most active. Tron and EOS had the most active dApps from all the 350,000 active accounts surveyed.

Increasingly, gambling platforms prefer the transparent nature of blockchain, and by incorporating tokens, they can improve user experience but most importantly transmit money across the world cheaply and faster. 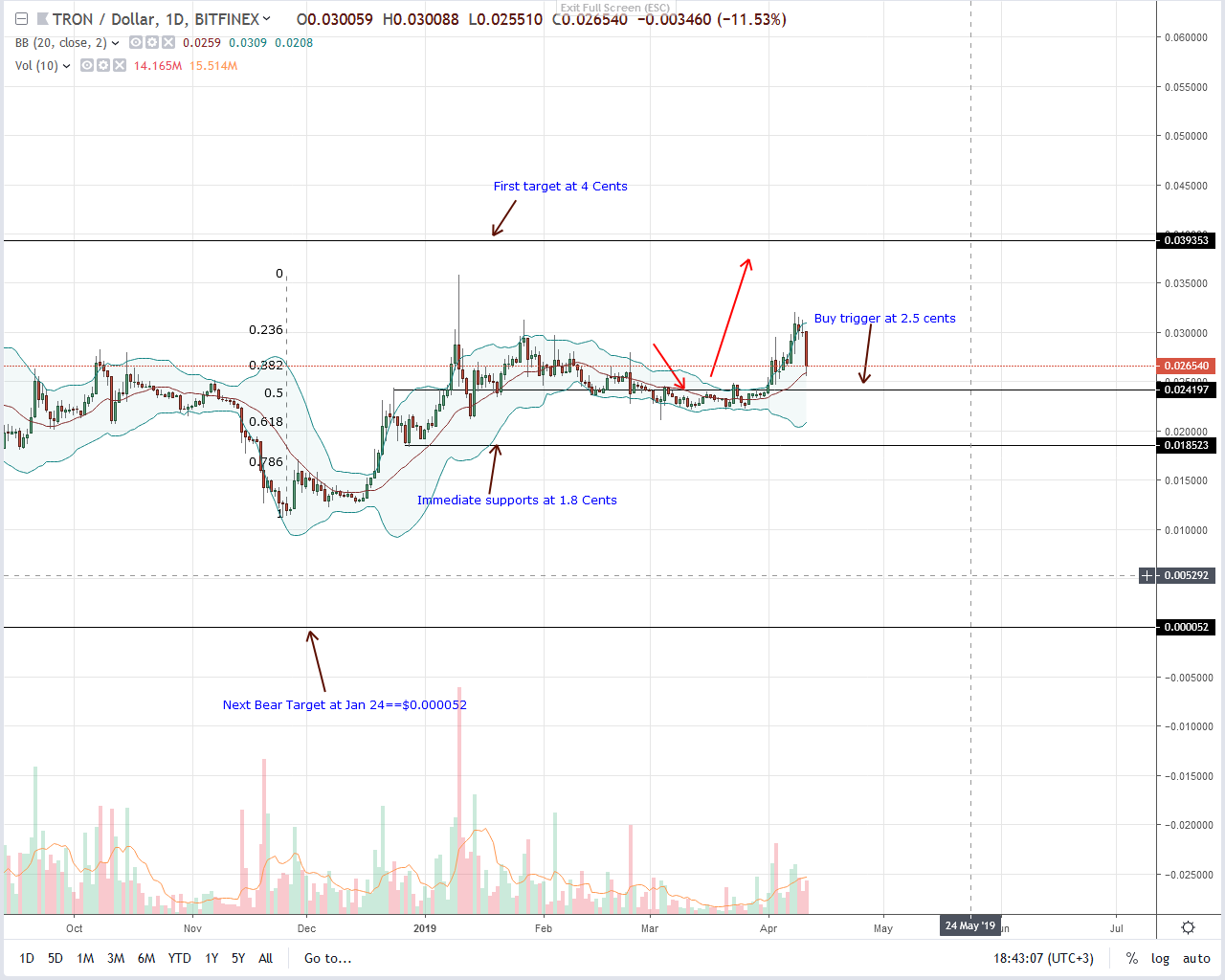 From the chart, Tron (TRX) is mirroring the rest. At press time, the coin is down 12.7 percent after a gap down during the value wiping sell-off during the Asian session.

Notice that though Tron (TRX) buyers had the upper hand—and they still do, trading within a bullish breakout pattern above 2.5 cents, the failure to comprehensively close above Jan 27 highs and 3.1 cents in line with our conditions as laid out in our last TRX/USD trade plan, mean bears have the upper hand.

Besides, with unstable over-extension of Apr 8-9 confirmed by a doji of Apr-10 was enough obstacle to squash bulls. All the same, we expect a correction back to 2.5 cents and should there be support, the next wave of higher highs above 3.1 cents will trigger long positions with the first target at 4 cents and later 6 cents.

Volumes are shrinking. It is common after a wide-ranging, high-volume rally like of last week. In light of this, our anchor bar is Apr-3 with 29 million. It is lower than those of Feb 4—42 million, but because we are bullish, any break above 3.1 cents must be with above average transaction volumes exceeding 29 million and even 42 million confirming buyers of Jan 14.