Candlestick formations, as well as fundamentals, favor TRX prices. Even so, TRX is under immense pressure and could cave in if prices drop below Jan 14 lows and main support line at around 2.5 cents. Upon completion of this BTT airdrop, we expect prices to snap back to trend.

There is good news for TRX coin holders: they will be receiving free BTT airdrops for the next six years. It is no doubt, good news. During this time, the Tron and BitTorrent foundation will dispense the 10.1 percent of the 990 Billion BTT tokens that has been set aside specifically for this airdrop.

Nevertheless, how are prices fairing? Well, like every other positive announcement or scheduled activity, asset prices are tanking. It was a similar case when TRX launched their blockchain and weeks later when they rolled out their Ethereum compatible virtual machine.

So, hours after what should be a rally, TRX is under immense pressure and retesting the 2.5 cents support. Generally speaking, this is bullish. As such, it is at these prices that savvy traders should load up on pullbacks realigning with the general trend. 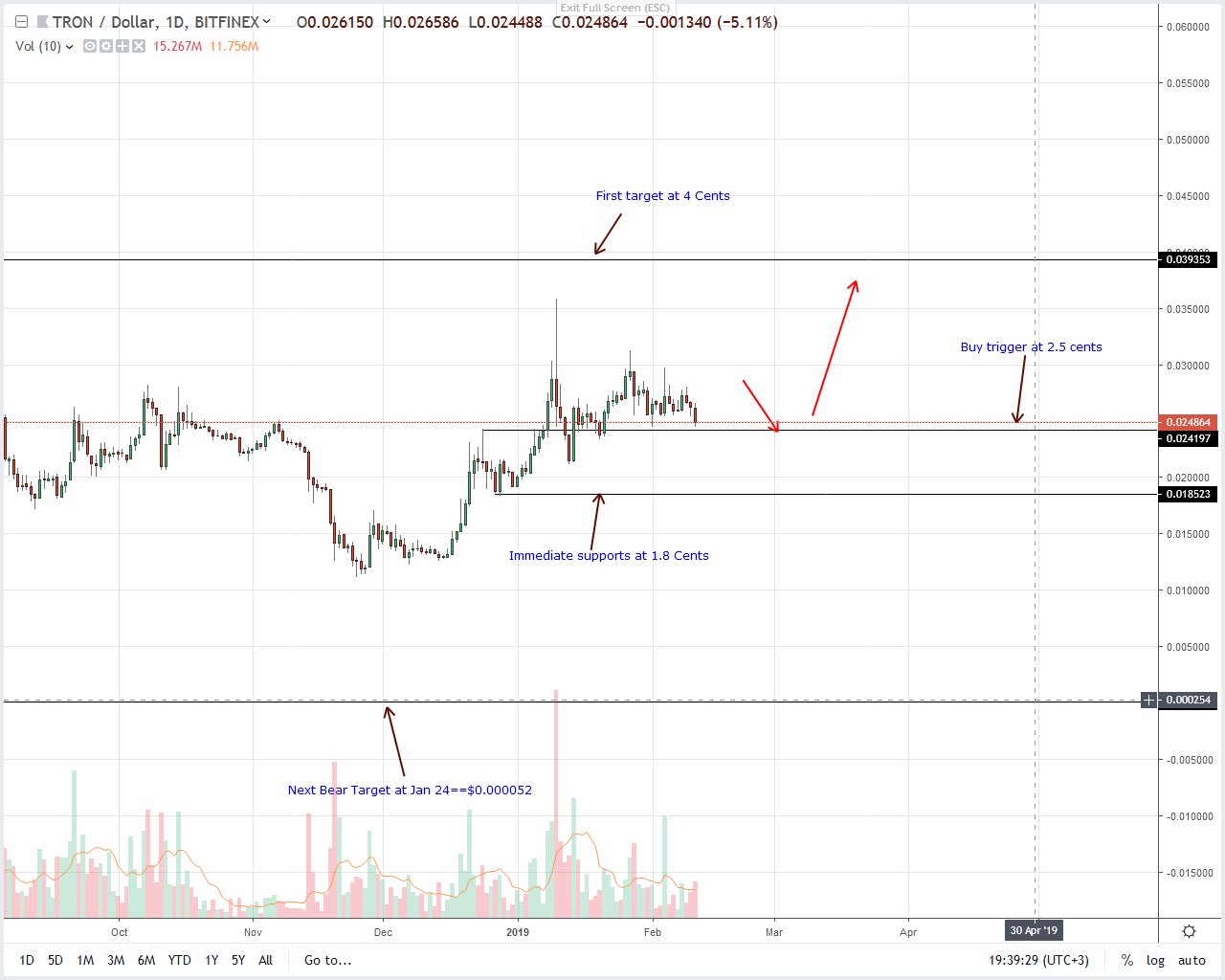 From the charts, the path so far has been bumpy despite TRX trading in a bullish breakout pattern. Unlike Bitcoin and ETH, for example, sellers have the better of TRX bulls, with liquidation at around 3 cents.

At spot rates, TRX is retesting our support zone at 2.5 cents. However, we remain bullish partly because of supportive fundamentals and BTT effect and secondly because of favorable candlestick formations. Unless otherwise there is a confirmation of today’s sellers as prices melt below our support line reversing gains of Jan 14, every low is technically a buying opportunity.

Like before, our ultimate target is at 4 cents but conservative, risk-averse traders will be free to load up once there is a high-volume, break and close above 3.1 cents. Before then, aggressive traders should be ramping up in lower time frames with first targets at 4 cents.

What is conspicuous on the last few days is the bull bar of Feb 4. Although it had a long upper wick hinting of sell pressure in lower time frames, it had high trade volumes. In a defined bull trend, we shall retain a bullish outlook. However, before conservative traders buy on dips, prices must first print above Jan 27 highs. Marking this surge should be high volumes first exceeding averages of 11 million and Feb 4

NiceHash to Smaller Cryptocurrency Miners : If You Can’t Beat 51% Attackers Who Lease Our Hash Power, Join Them

Analyst: Bitcoin Price Similarities To 2015 Bottom Is “Unreal,” What Could it Mean?