In light of today’s candlestick arrangement and level of participation, TRX is likely to drop to 2.5 cents. However, should it found support; the bounce will see TRX clear 3 cents as bulls march to 4 cents by mid-February.

At ninth, TRX market cap stands at $1.708 billion and $300 million away from flipping Litecoin as the eighth most valuable coin. Other than that, TRX is down 5.1 percent in the last day but up 32 percent in the previous week meaning the currency is one of the top performers. In line with our TRX/USD price analysis, our bullish stance is still valid, and as long as prices are above 2.5 cents, every low should be a buying opportunity. Targets will remain as before—at 4 cents and later 6 cents.

After spending 15 years dealing with matters law and compliance, the Tron Foundation plans to use David Labhart’s experience. David is a former US SEC supervisory attorney, and by agreeing to join Tron as Head of Compliance and co-General Counsel, it is clear that the foundation’s power wielders are not taking compliance lightly.

By hiring David, it is clear that Justin Sun and company want a clear rapport with financial authorities across the globe. The move is in line with Justin Sun’s ambition of seeing the foundation open up communication channels with regulators ensuring that network development bode well with regulator’s dictates.

Besides, it’s a timely addition coming a week before niTron Summit where regulators, platform users, entrepreneurs, and industry leaders will come together to discuss pertinent issues in the sector aside from establishing useful contacts. On joining Tron, David said:

“Joining TRON is the perfect progression in a career driven by a passion for the frontier of the financial industry; where technology meets regulation. Blockchain and cryptocurrency are the next steps in the evolution of the world’s financial system. I’m excited about Justin’s passion and long-term view of the benefits and potential impact of this new technology.” 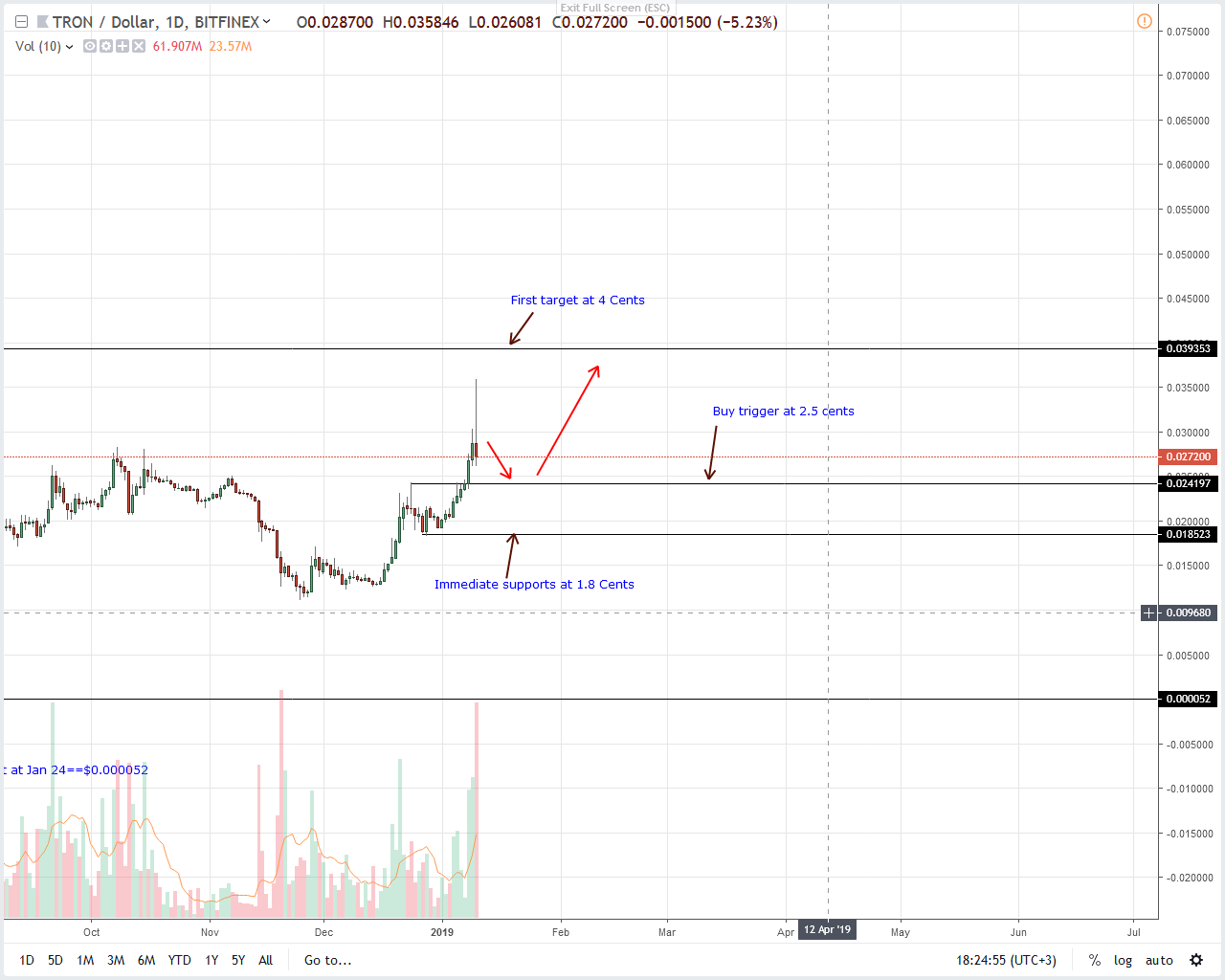 With a bear pin bar and high trade volumes, it is hard to recommend buys at spot prices. That’s unless of course a countering high-volume bull bar fading sellers prints in the 4HR chart. That’s unlikely, and chances are we shall have a double bar bear reversal pattern by today’s close. However, that should not be a cause of concern.

To reiterate our stand, we expect bears to drive prices back to 2.5 cents. It is at this level that buyers should be searching for longs in lower time frames in a classic retest phase. Nonetheless, drops below2.5 cents with volumes exceeding averages could spell doom for TRX bulls. In that case, price may sink to 1.1 cents.

Today’s volumes are high—61 million versus 23 million and above Dec 21—45 million against 15 million. Since it is a pin bar, we expect TRX prices to drop back to 2.5 million in a retest phase. If not and bears step in, it is likely that Nov-Dec bear trend will resume.

Do your own research. Opinions are those of the author.