The family of Dave Kleiman is suing Craig Wright for $5 billion claiming that he unlawfully forged, backdated and signed off part of Dave’s share of around 1.1 million BTCs they had mined. Whether an eventual closure will see these BTCs liquidated or not, Bitcoin prices are recovering although with light trade volumes.

Craig Wright is a controversial figure. He claims to be the mysterious Satoshi Nakamoto, the man who mined the first 50 Bitcoins and made the first Bitcoin transfer sending 10 BTCs to Hal Finney. Created as an alternative to Banks blamed for creating a crisis, Bitcoin has grown by leaps and bounds since launching back in 2019.

A decade later, a case tagging Craig Wright has been revived in a US District Court where the plaintiff, the family of Dave Kleiman, alleges that Craig signed off more than 500k BTCs from his former business partner. Dave family believes that Craig forged documents and backdated them to appear as if Dave has signed away part of his share—estimated to be around 550k and 1.1 million BTCs to Craig. Thanks to these accusations, Jeff Garzik has been subpoenaed. Even so, Craig and Dave were early adopters and despite the controversy surrounding their assertions, their contributions to the sphere are sound. 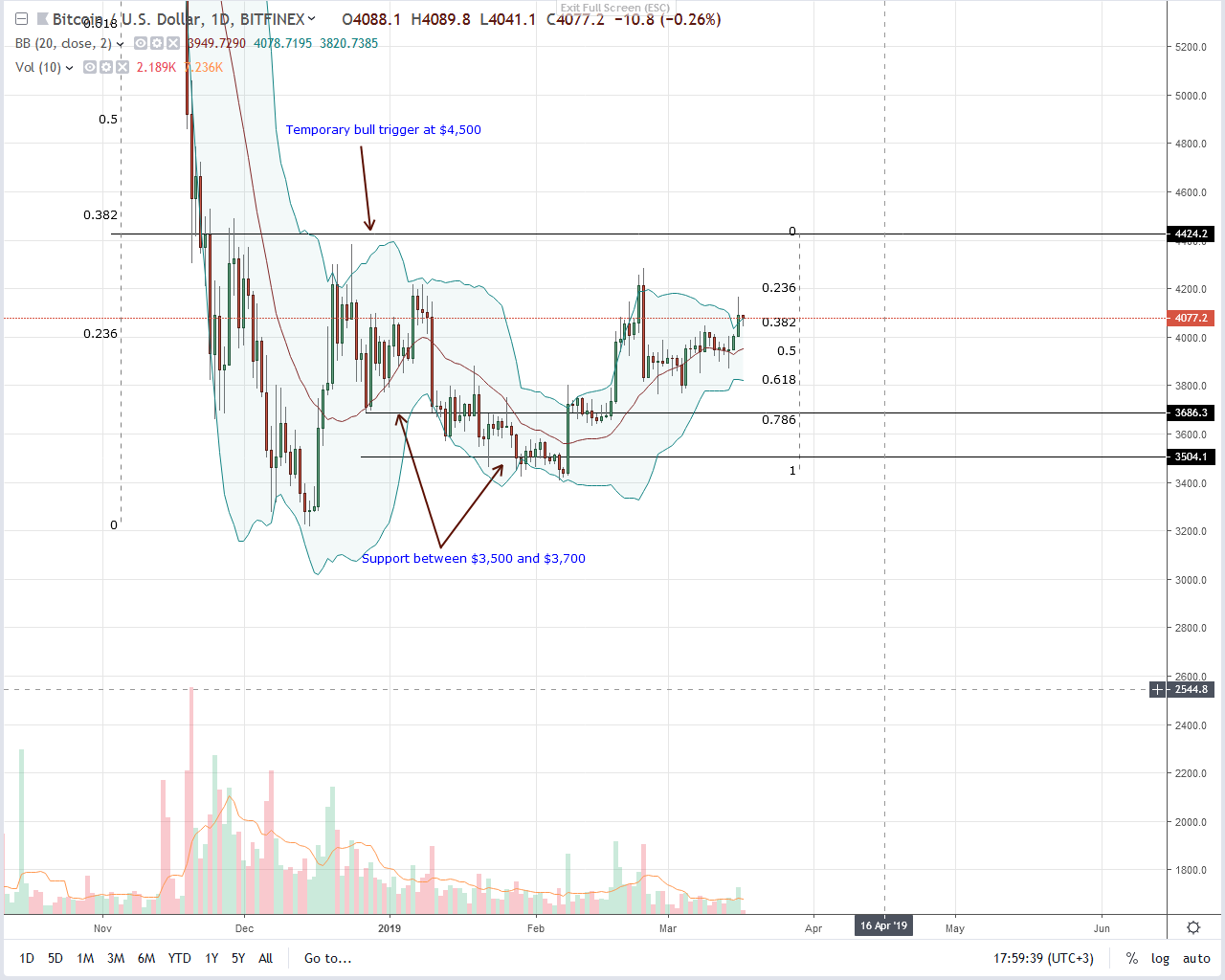 Bitcoin is on an uptrend. At the time of writing the coin is stable and up 1.3 percent from last week’s close. Despite our optimism, these hard statistics point to price consolidation. Like in our previous BTC/USD price analysis, Bitcoin prices seem to be banding with the upper BB meaning risk-off and aggressive traders have a chance in lower time frames.

As long as prices are trading above $3,800 in a minor breakout trade, bulls could build enough momentum to reverse losses of Feb 24. Once that happens, there will be little upside resistance, and BTC could as well retest $5,800 and $6,000 in the next couple of weeks.

Sustaining recent higher highs are weak volumes. By yesterday’s close, data from BitFinex indicate that volumes averaged 7.78k against 13k. It is low when compared to those of Feb 23 when average was 16k. Regardless, short-term and aggressive traders should load on every dip as conservative ones wait for a strong close above Dec 2018 highs with high volumes above 36k.