Perhaps the only triggers needed for higher highs was CoinBase announcement. In days ahead, XRP will be available for trading at CoinBase Pro, and this could help drive volumes higher boosting prices as a result.

XRP is outperforming other assets like TRX and BNB. The reason for their renewed interest is CoinBase’s announcement that it will be offering support for XRP at CoinBase Pro. CoinBase Pro, previously known as GDAX, is where CoinBase customers can trade, buy, sell or transfer their digital assets while enjoying low fees. Moving on, XRP will be available for trading but until when liquidity is satisfactory.

In the meantime, it is CoinBase decision that is a source of optimism as well as speculation. Questions linger and whether CoinBase customers will someday buy XRP like they do Bitcoin and Litecoin remain unanswered.

However, it is CoinBase’s stringent nature and their emphasis on compliance that is a source of assumptions that they have approved XRP as a utility. Will this force the SEC to clarify their stand now that CoinBase customers are predominantly from the US?

If that is the case, then it is likely that SEC will make their position known and open the door for remittance companies as Ramessa Online to upgrade and even leverage xRapid as a way of achieving faster settlement times and low fees. 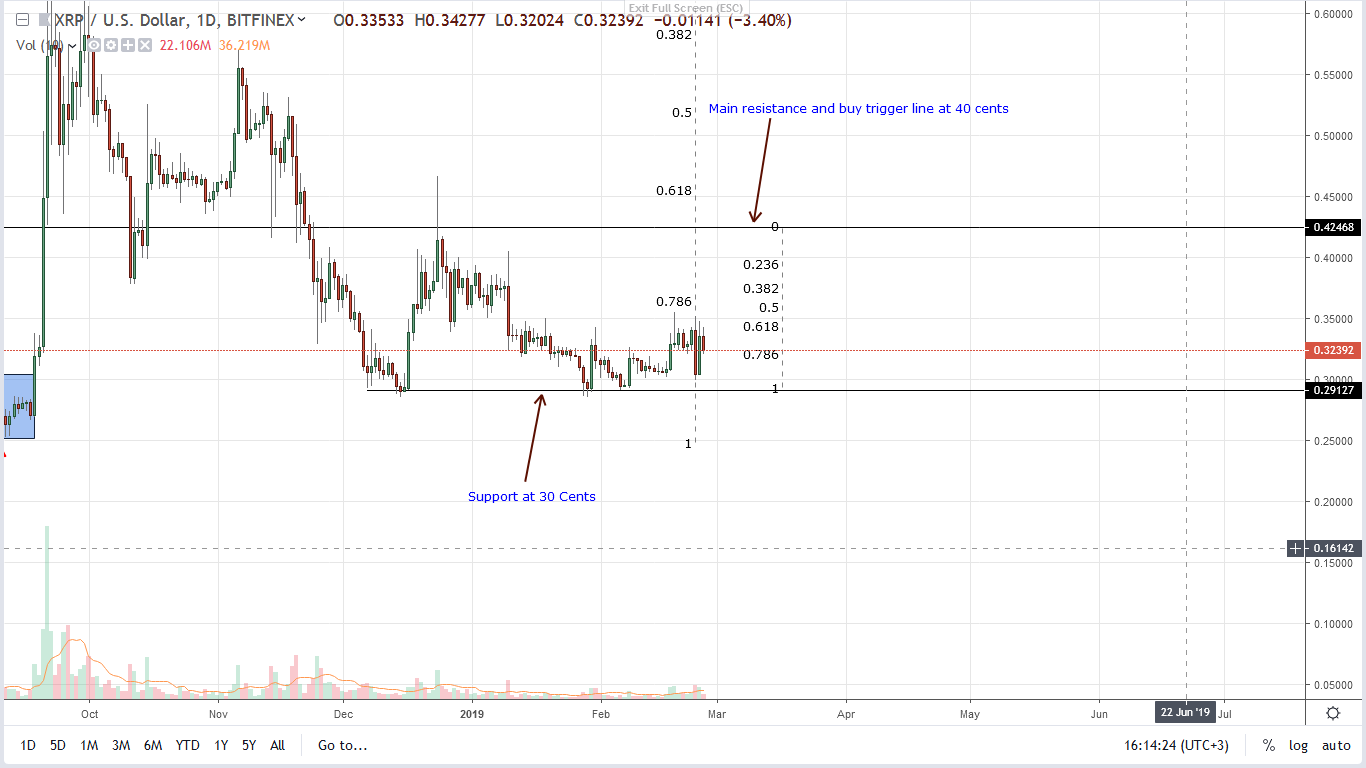 In a sea of reds, XRP is the only asset printing greens in the last 24 hours. At the back of high transactional volumes and optimism, Ripple (XRP) bulls reversed losses of Feb 24.

Because of this revival, the 30 cents level is cementing itself as a reliable support line and a possible mark that could propel prices to new highs.

Regardless, Ripple (XRP) bulls will be free of sell pressure once prices edge past 34 cents in a bull breakout move at the back of above average volumes as laid out in our last XRP/USD trade plans. After that, modest targets will be at 40 cents, 60 cents and later Sep 2018 highs at 80 cents.

Market participation levels are high, and after Jan 30 double-bull bar pattern, average XRP trading volumes have doubled from around 17 million to 34 million of Feb 25. Because trade volumes were high on Feb 24—61 million, exceeding Feb 25—52 million and Feb 19—54 million, a convincing break out driving prices above 34 cents should be pumped by high volumes above 61 million and 83 million recorded on Jan 10.

The post Ripple (XRP) Path to the Moon after CoinBase Announcement appeared first on NewsBTC.

Bitcoin (BTC) Price Under Pressure But Fundamentals Are Very Bullish