There is progress from the fundamental side of the equation. Prices are stable but on a bullish path while Ripple continues to partner with universities. From the chart, XRP stands to retest 40 cents and even 60 cents by mid-Feb 2019.

Cryptocurrencies and initial coin offering may be illegal in China. However, that is not stopping Ripple, the company behind the cryptocurrency, XRP, from partnering with the Institute for Fintech Research, Tsinghua University (THUIFR). Their collaboration has yielded a new program: The Blockchain Technology Research Scholarship Program (BRSP).

We are excited to announce that partnering with @Ripple, we launched Blockchain Technology Research Scholarship Program (BRSP) in 2019 ! pic.twitter.com/kImc5p2d4h

With regulatory headwinds, the expansion and adoption is slow and made worse by dropping asset prices. Now part of the program’s objective will be for guidance, funding in-depth research on Fintech as well as contributing and development of favorable policies. The end game is to promote use of blockchain and related applications as cryptocurrencies.

“The program’s goal – to provide students with opportunities in blockchain research – closely aligns with that of Ripple’s University Blockchain Research Initiative; we’re thrilled to support THUIFR in this endeavor and look forward to its launch.” 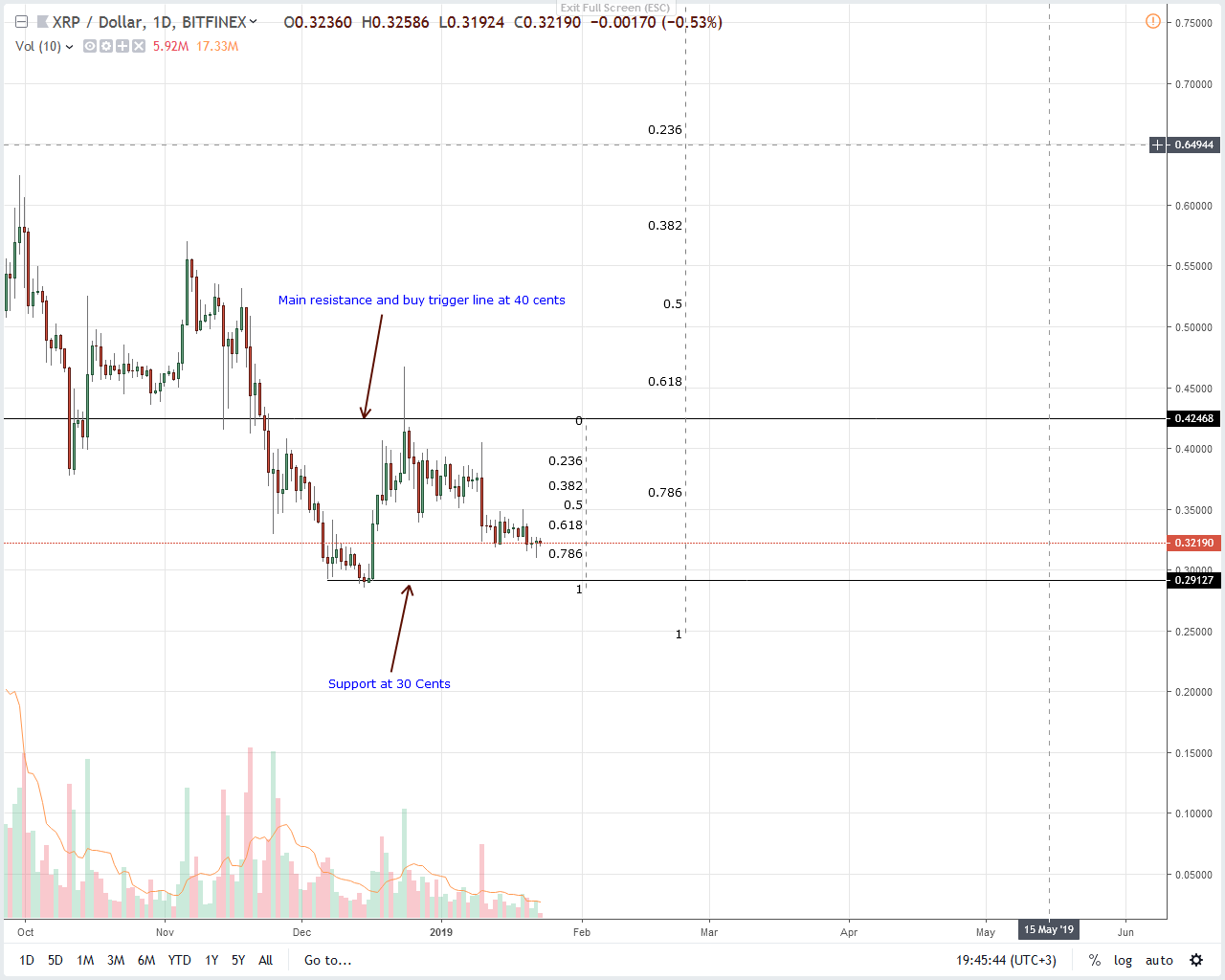 At the time of press, XRP is stable, but the ETH gap continues to widen—now at $700 million. Overly, this is bullish and to restate: XRP is technically bullish against the greenback as long as prices are rallying towards 34 cents. The 30 cents mark continues to shore prices.

As we have said, all the Fibonacci retracement levels are psychological and are proven reaction points. It was confirmed yesterday when prices reacted at the 78.6 percent mark. Because of deep corrections from Dec highs, the farthest XRP can retest is Dec highs at 40-42 cents. With this guidance, bulls should be on the sidelines only planning to initiate longs once prices rally past 34 cents—the 50 percent mark—preferably with high transaction volumes helping bulls recoup losses of Jan 20.

Despite favorable fundamentals and candlestick arrangements, transactional volumes are low with dropping averages. Even so, there is a chance that increasing demand will lift these averages from 18 million to above 83million registered on Jan 10. Because we are net bullish, XRP stands to soar from spot rates to 60 cents by mid-Feb 2019.