At long last, the crypto market has started to undergo drastic fluctuations. Following weeks of remaining in a lull-esque state, Bitcoin (BTC) broke out of its bear market shell in early-February, posting gains backed by notable levels of volume.

While a substantial amount of time has passed since the aggregate value of all cryptocurrencies pushed from $110 billion to $122 billion in a day’s time, volumes have remained strong, as this nascent market continues to see rapid price action.

In the past 24 hours, per data from CoinMarketCap, cryptocurrency exchanges across the board have posted $34 billion in nominal values — the highest reading of this figure since late-February.

While volumes are still lackluster when compared to those seen at the height of 2018’s speculative mania, some have been enthused by this booming facet of the broader digital asset space. But, The Crypto Dog, a leading analyst that commands a Twitter following of over 100,000, recently called volume readings into question.

The industry commentator first drew attention to the fact that since October 2018, volume has been steadily increasing, even as Bitcoin fell further and further. Although many have deemed this underlying market theme as entirely legitimate, Crypto Dog went on to question the veracity of the figure, calculated by markets analytics provider TradingView.

Either this volume isn't representative of reality (possible, could be wash trading being calculated in here), or we're about to bust out into a raging bull market.$crypto #Bitcoin pic.twitter.com/nT7DplNVYt

Crypto Dog wrote that “the volume could be fake,” noting that he, along with the public, has no idea as to how analytics providers calculate volumes, meaning that such services could lump in “shady exchanges claiming to have loads of volume.” Backing his call, the self-proclaimed “STEM dropout,” noted that a platform named BitMax, purportedly launched in July of 2018, has posted the highest 24-hour volume at $1.66 billion, just a tad ahead of Bitcoin futures giant BitMEX’s $1.52 billion.

While such activity could be entirely possible, hands down, few commenters responding to the personality’s point knew of BitMax. In fact, one user wrote “WTF” in response to Crypto Dog’s decision to bring up BitMax. Those that did know of the platform responded with hilarity, noting that without a doubt, there are trading bots and market makers on the platform. BitMax’s volume may consist of 5% of the market’s reported daily volumes, but some argue that this seeming issue runs deeper than meets the eye.

But, there remains a fleeting chance that such levels of trading are genuine. Mati Greenspan of eToro sure does believe that it is. In a number of posts on Twitter, eToro’s in-house crypto trader has drawn attention to why high market activity could be a positive sign for this space moving forward. Greenspan once explained that “more meaningful moves” often go hand-in-hand with higher volumes. He later doubled down on this thought process through a number of mediums.

Even Crypto Dog noted that if such volume is reality, “we’re about to bust out into a raging bull market.”

As Greenspan and other analysts seem to be convinced that volume levels posted on sites like CoinMarketCap, LiveCoinWatch, and the like, are entirely bonafide, many argue that a rally is inbound?

But could it be? No, maybe not.

Sorry to break it to you, but many analysts are leaning short-term bearish at the moment. Willy Woo, an Australian crypto researcher, noted that if Bitcoin follows the trend of sell-offs it experienced over the past 14 months, a strong move lower could be seen in the coming weeks. Backing his call, Woo drew attention to the number of open long and short positions on Bitfinex, and how cryptocurrencies have previously reacted to trends in this figure. 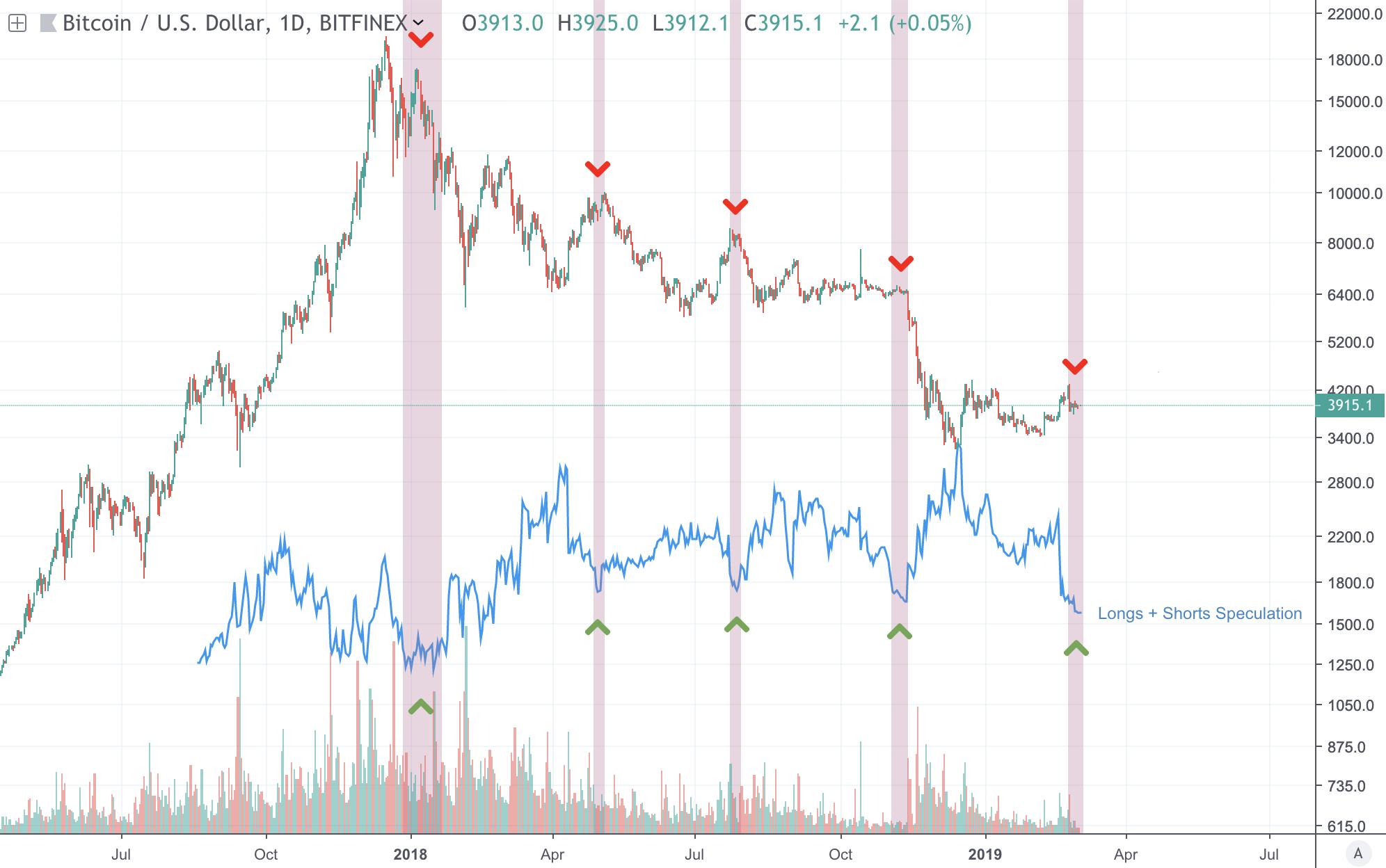 He drew a line that accentuated that the last time the market was this indecisive, shown by the lack of speculation, BTC fell dramatically. The same could be said about 2018’s periods of low speculative volume, seen prior to January 2018’s drawdown, May’s bull trap, and August’s consecutive bull trap. Thus, Woo concluded:

“Zones of minimal Long + Short positioning have historically coincided with bearish price action during bear markets. When [the market is] undecided, the ‘trend is your friend’ prevails.”

New York-based Alex Krüger‏ has also expressed wary sentiment over recent weeks. In a recent thread, the analyst explained that as the entire cryptocurrency space is basically based solely off speculation, there is no official (or peak for that matter) for Bitcoin and other cryptocurrencies. Krüger‏ noted that this space is still rife with irrational exuberance, drawing attention to “worthless s*itcoins worth $100 million or more” to back his point. And with that, he made it clear that lower lows aren’t an impossibility.