Although Bitcoin is on an uptrend, it may correct in days ahead as sellers of Feb 24 flow back pouring cold water on bulls’ effort. All the same and according to Zhao, a Chinese billionaire, Bitcoin holders should hold as much as possible when nobody cares.

According to the US SEC, Bitcoin and Ethereum are the two most decentralized platforms. Indeed, as a pioneer and a growing network powered by a global community, Bitcoin represents freedom and a gradual disassociation from power. However, as dopamine-triggering as it is to own and transact with Bitcoin, we must not bury our heads in the sand.

Trading BTC is illegal in China, but the country is by a wider margin, home to more than 80 percent of all Bitcoin mining. Because of this, the “White House, in particular, seems to be thinking about what it means to have 80 percent of Bitcoin mining taking place in China and a majority of Ether mining taking place in China”, said Cory Johnson, the former Chief Marketing Strategist at Ripple in an interview. All in all, it will be counter-productive to orchestrate a 51 percent on the network despite claims that two Chinese pools have the firepower to attack the system even though it is highly unlikely.

While not allowing room for uncertainty, a Chinese billionaire Zhao Dong is calling for patience because if people” don’t pay attention to Bitcoin now, they won’t pay much attention to most of the time, so for them, only how many tens of thousands of Bitcoins will break them will be noticed again” adding that believers of BTC should “hold as much as possible when nobody cares.” 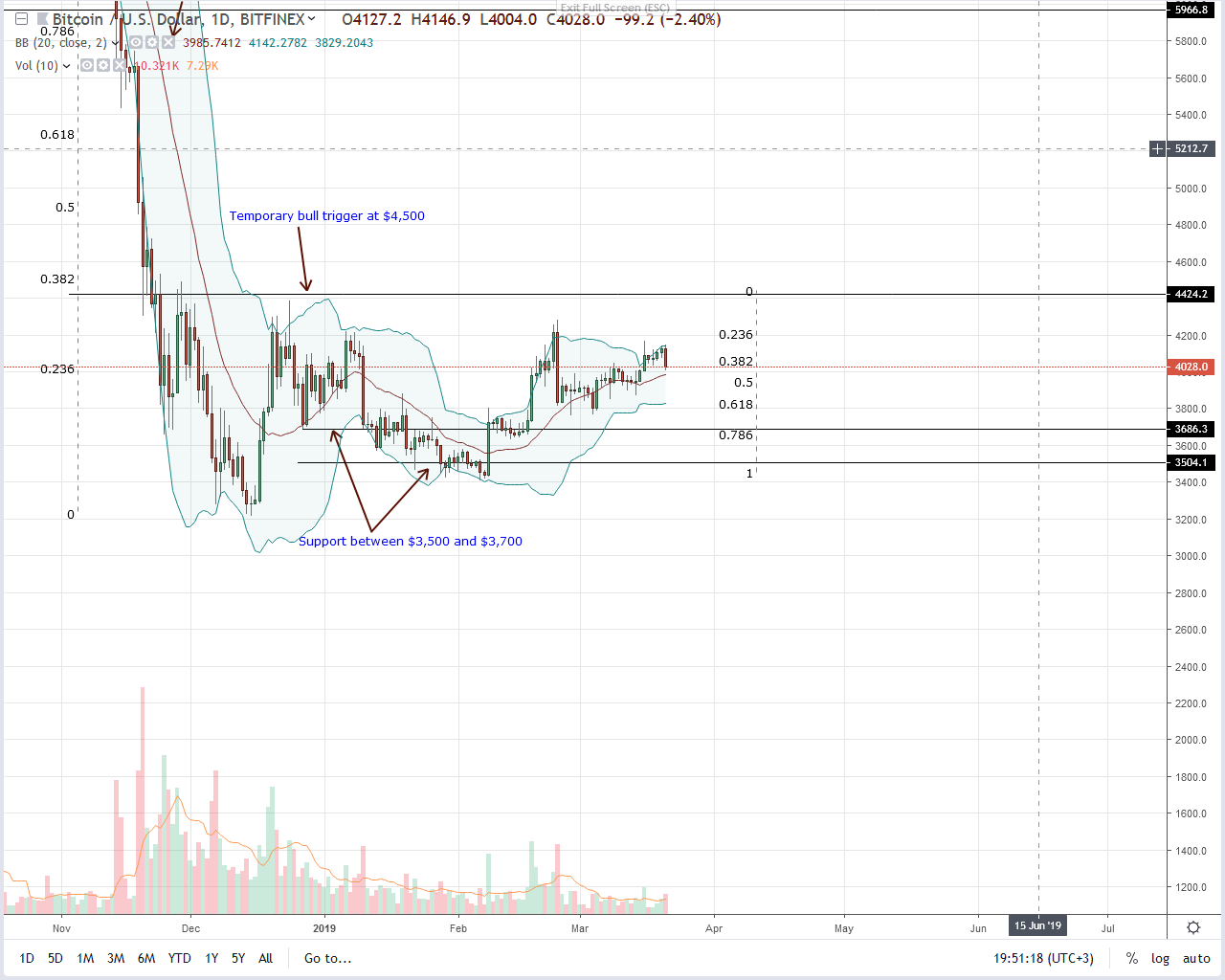 For coin holders, it may be an excellent time to ramp up. However, for traders, candlestick arrangement points to weakness, and that means every high should be a liquidation level in days ahead. It is easy to see why.

A level deeper in the 4HR chart and demand is waning as prices flat out. It is likely that buyers will correct the over-extension of Mar 16. As a result, BTC could temporary slide back to $4,000, gifting aggressive traders an opportunity to ramp up with first targets at $4,500.

Feb 24—36k versus 19k average– is our anchor bar. In an effort versus result point of view, weak volumes are driving recent bulls and would likely crumble unless there is an injection of high transaction volumes above driving prices above $4,200 as aforementioned.

Ripple (XRP) Under Pressure Within a 4 Cents Range