Bullish Bitcoin (BTC) Inch Close to $4,500 as Tech Leader Says it is Better than Paper Money

Adoption is on the rise, and it is at this juncture that Elon Musk has reasons to believe that Bitcoin is brilliant and a better tool for value transfer. As an influencer, this is bullish, and as long as prices are on the rise, we expect momentum to build up.

Interesting days ahead. There is a full adoption wave, and that is what the community needs. While Bitcoin is fashioned to be an alternative to government-issued paper money, most corporations are reluctant to take the lead and accept it as a form of settlement for customers willing to use the global coin. Tesla is a public listed company, but the founder Elon Musk has on numerous occasions aired his two cents on Bitcoin and cryptocurrency. He continues to make comments, but the company is yet to make it clear whether they will be accepting BTC for their new, fuel-free Tesla. Considering Tesla’s objective of championing green, sustainable energy which is everything against the mechanics powering the network–energy demanding chip-sets, it is unlikely that they will quickly jump in and join other companies like Trading View for example which is accepting BTC in its purest form.

Nonetheless, the question of sustainable energy and blanket conclusions made by critics of the tech that Bitcoin is not at all power efficient continues to draw debate and is quite sticky especially if we factor in the nomadic nature of miners and their propensity to set rigs in a zone with cheap, surplus power. All the same, Elon Musk being an innovator and entrepreneur has some bullish insights on Bitcoin. He calls the rare coin brilliant and a better conduit for the transfer of value. 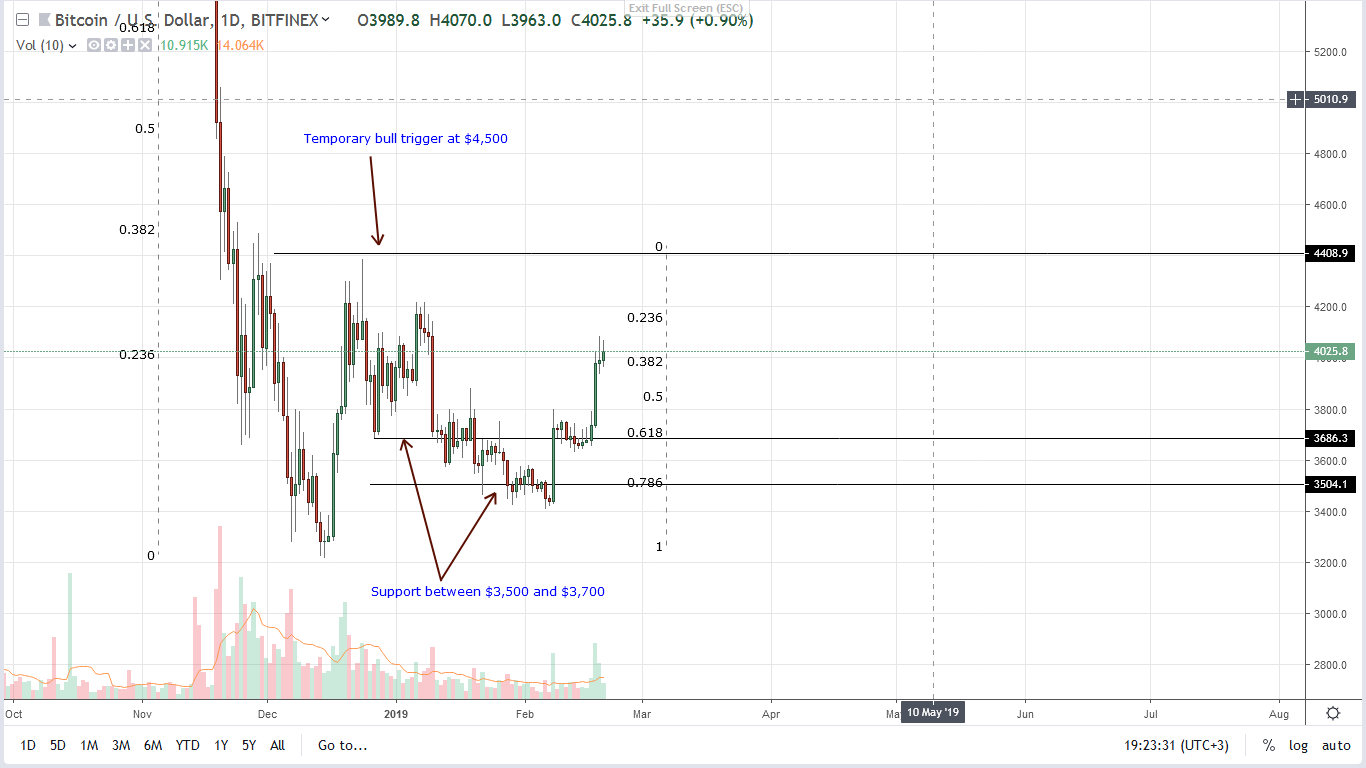 Prices are correcting, but the path of least resistance is up. At spot rates, BTC is up 8.1 percent in the last week and trading above $4,000 according to data streams from BitFinex. Because our trade conditions are live and traders can fine-tune their entries in lower time frames with the first target at $4,500, fitting stops should be around $3,500–$3,800 zone. Like in our previous emphasis, once prices edge past $4,500 or Dec 2018 highs, it is likely that BTC prices will expand towards $5,800–$6,000 at the back of strong volumes.

In the secondary volumes charts, participation is on the rise. Since recent higher highs are at the back of strong volumes–37k, it is clear that bulls are in charge unless of course there are counter moves with equally high liquidation volumes.

The post Bullish Bitcoin (BTC) Inch Close to $4,500 as Tech Leader Says it is Better than Paper Money appeared first on NewsBTC.

Drastic Shift in Sentiment in Crypto After Bitcoin Surges: Technical Indicators Point Toward a Rally