Talk about star power! On Monday afternoon, Elon Musk, an entrepreneur with the cult following of all cult followings, suddenly signal boosted the crypto space, dedicating an entire tweet to the word “Ethereum.” His intentions remain unclear.

Funnily enough, this comes just days after Musk/his lawyers and the U.S. Securities and Exchange Commission (SEC) settled a deal about his often mischievous, laugh-inducing use of Twitter. According to a TechCrunch report, the Tesla Motors chief executive will need to seek approval for his tweets if said message involves his companies’ financial statuses, nonpublic legal information, new or proposed businesses, the sale or purchase of company sales, among other things.

It appears this brief mentioning of “Ethereum” does not fit into the above restrictions, unless Musk is actually preparing to delve into cryptocurrencies of course.

In July of 2018, Elon Musk made his first mentioning of Ethereum, but not really. As reported by NewsBTC previously, the SpaceX founder poked fun at what he called “Ethereium scambots,” by replying to a user jokingly asking for cryptocurrency by saying the Ether he ‘promised’ was “coming, I swear.” In a later tweet, Musk joked that he “wants ETH, even if it is a scam, ” evidently referring to the incessant stream of crypto-scamming bots flooding his mentions.

And on Monday, as aforementioned, Musk continued his run-ins with the cryptocurrency community, posting the tweet below, before a subsequent “jk.” Musk’s sporadic use of Twitter quickly elicited a bubbly response from the crypto community at large.

Gabor Gurbacs of VanEck’s crypto division and Blockstream’s Samson Mow shilled Bitcoin as Justin Sun did the same for his own cryptocurrency, Tron. Analyst The Crypto Dog posted a chart of ETH, while trader Cache wrote “$14.”

Even Vitalik Buterin, the Russian-Canadian genius behind the protocol, threw his hat into the ring. Buterin implored Musk to “come to our Devcon in October,” to which Musk responded, “Stop giving away free ETH!,” further referencing the cryptocurrency swindlers that were all the rage in early-2018. It appears Musk won’t be gracing the blockchain development conference, at least for now.

But what was most notable in this odd Twitter interaction, as pointed out by Ether proponent Anthony Sassano, was the effect it had on Google Trends. At the exact moment that Musk issued the tweet seen above, the short-term search interest for “Ethereum” skyrocketed. The thing is, the Tesla chief has a hefty 26.2 million followers, most of which are either unaware of cryptocurrencies or aren’t keeping up to date with the latest news in the realm of Ethereum.

While the influx has since petered out, returning to pre-Musk levels, it appears that Musk’s tweets are taking seriously, in spite of the “funding secured” debacle seen last year.

This comes just two weeks after Musk claimed that Dogecoin, a long-standing digital asset for fun-loving, meme-centric netizens, might actually be his favorite cryptocurrency.

In the hours that followed this tweet, Musk took the mantle as the first (and last) ‘CEO’ of Dogecoin. The entrepreneur quickly replaced his Twitter biography with a short “CEO of Dogecoin.” He subsequently tweeted a meme about Dogecoin, one that accentuated the Silicon Valley mainstay’s enamorment with Internet culture, and a Bitcoin price-related article from The Onion. While the latter action was slow to garner engagement, the former quickly went viral, not just on Crypto Twitter, with the joke-ridden tweet sporting tens of thousands of likes. And just minutes after that, Musk regened on his newfound position, becoming the “Former CEO of Dogecoin.” What a turnaround. 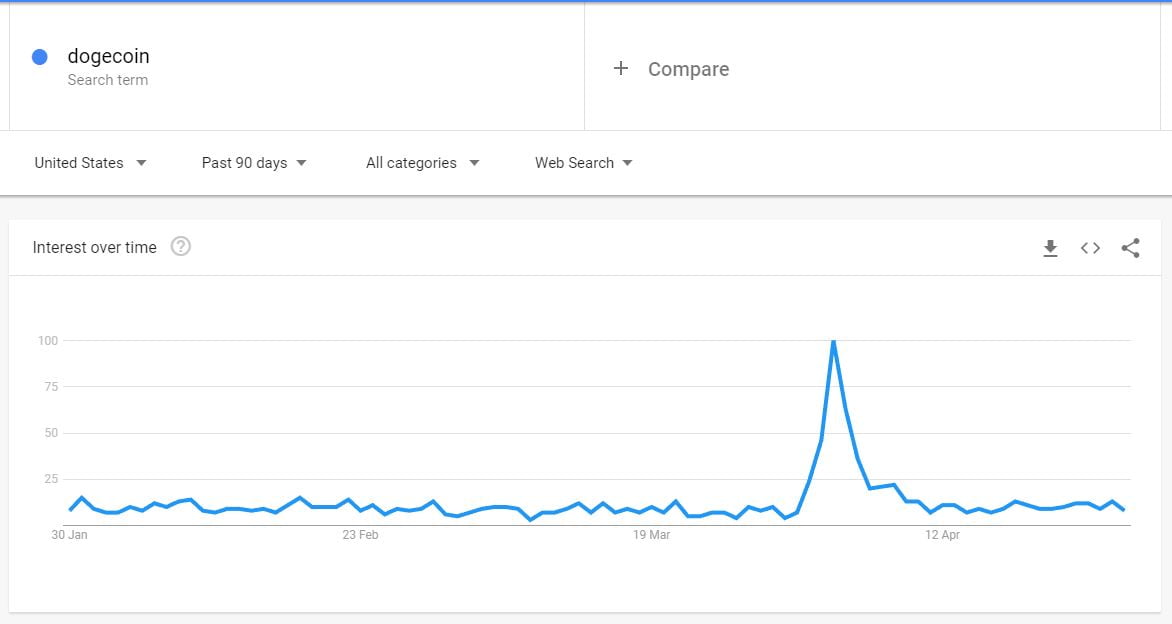 Could Musk Hoist Crypto Out Of A Bear Market?

All this begs the question, what exactly is Musk planning with cryptocurrency? Or more accurately, is he even planning to formally delve into this industry?

The answer to that question is likely no, for Tesla anyway. Per previous reports, the billionaire businessman took to the in-house podcast at ARK Invest. Near the end of the recording, the interviewer, ARK Invest’s chief executive, threw a curveball, asking about his thoughts on Bitcoin.

Musk opined that he really likes the underlying structure of the Bitcoin blockchain, but brought up his skepticism of the energy-intensive Proof of Work model. Yet, he made it clear that cryptocurrencies in and of themselves are inherently better than paper fiat money, as such assets provide meaningful benefits that are especially useful in underprivileged nations. Mainstream media quickly picked up on the news, spreading the news to millions the world over that a respected figure in business is actively interested in cryptocurrencies. But he made it clear that Tesla is unlikely to foray into that industry.

That isn’t to say that Musk personally, or another one of his businesses could eventually adopt crypto in some sense. But even if Musk doesn’t satisfy the crypto community, tacitly shunning this innovation for another passion project, this recent tweet marks continued celebrity interest in the space.

Related Reading: Celebrities May Be Scooping Up Millions Worth Of Bitcoin

Bitcoin exchange outflows surge as ‘not your keys,...