Although it is overwhelmingly bullish that CoinBase Pro now supports XRP trading pairs, bribing rumors is a stain. Miguel Vias of XRP Markets took to twitter stating that the listing was an independent CoinBase decision. All the same, Ripple (XRP) is in consolidation above 30 cents.

Now that XRP is available for trading at CoinBase Pro, the army should be jubilant. However, that is not the case.

Did Ripple pay Coinbase for their token being listed?
"we're not discussing publicly"#xrp #youregoddamnrighttheydid pic.twitter.com/cuuxWGt6ch

Instead, there is a section of the populace that is suspicious of CoinBase making a U-turn and all of a sudden listing the world’s third most valuable coin, XRP. The origin of all these rumors and suspicious originates from reports back in Q2 2018 that Ripple inc, the majority owners of XRP, tried to “stimulate” XRP listings at two exchanges—Gemini and CoinBase.

We’re happy to go on the record. Coinbase’s listing of XRP (also, not “our token”) was Coinbase’s independent decision – we did not give them anything to make it happen. https://t.co/xTVvACqsQa

There are allegations that Ripple Inc offered to pay CoinBase $100 million in XRP and an amount between $1 million to $3 million to Gemini for “quick liquidity” should the exchanges offer to avail XRP to their customers. All these were unsubstantiated. As a result, Miguel Vias, the head of XRP Markets, is dismissing this bribing rumor saying CoinBase listing was an “independent” decision. 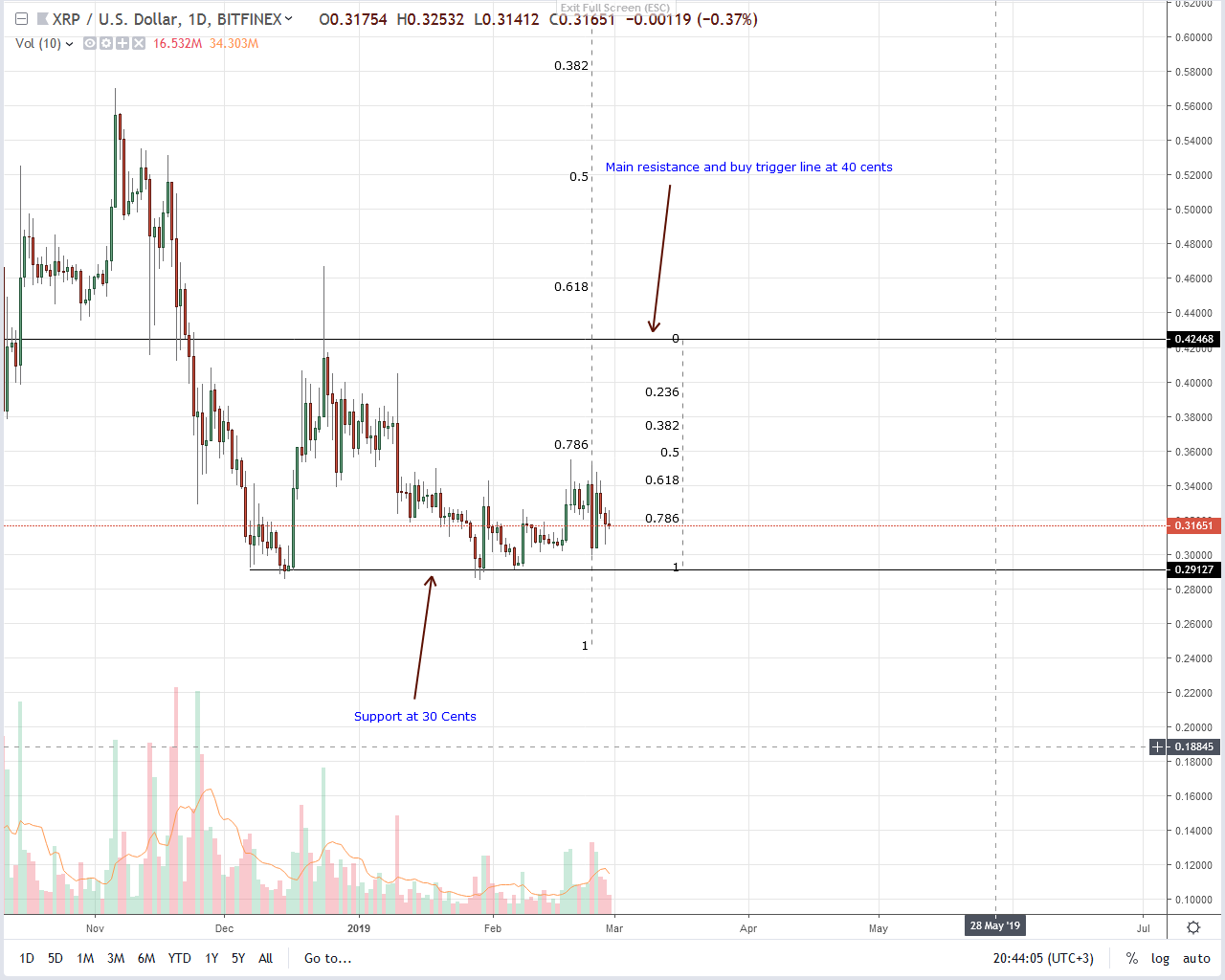 XRP prices are unaffected and are all over the place. Days after the coin experience the now fading “CoinBase Effect,” XRP is down 6.3 percent from last week’s close and could drop lower in line with Feb 24 sell-off.

Even so, we shall maintain a bullish outlook and while anchoring our analysis on Feb 18 bulls, expect prices to find support from 30 cents and rally above our first minor resistance and buy trigger line at 34 cents. It is after prices edge past this buy trigger line is when risk-off traders can buy on pullbacks with first targets at 40 cents.

Any break above will undoubtedly reinvigorate trading as price action finally syncs with strong bulls of the trend-setting Sep 2018 double bar bull reversal pattern. As far as recent price action is concerned, prices are in accumulation, and as long as they trade above 30 cents main support, bulls have a chance.

Coupled with supportive fundamentals, XRP is technically bullish. However, we are yet to see a break-off from recent accumulation despite Ripple (XRP) transactional volumes more than doubling in Feb—17 million to 34 million (data from Bitfinex). From an effort versus result point of view, a perfect bull bar that will stimulate higher highs must have high trading volumes exceeding those of Feb 24—61 million and most importantly recent averages of around 37 million.

Will Bitcoin (BTC) Collapse Because of Feb 24 Sell Off?