The battle between Bitcoin bulls and bears rages on and the former have the upper hand at the moment. As BTC grinds ever higher those short positions which have loaded up may start to get exposed which could lead to liquidation.

Bitcoin has hit a new 2019 high of just over $5,600 and has shown strength over the past week. Higher lows have been posted several times and there is a clear uptrend on the weekly chart.

According to TradingView Bitcoin matched its 2019 high of $5,450 a few hours ago before starting to retreat a little. A surge a few hours later took BTC to a new high of $5,640 just above the 50 week moving average. Daily volume is now over $15 billion and has reached its highest level for the week. The bulls are leading things at the moment.

Crypto trader and analyst ‘fil₿fil₿’ has been looking into short positions at Bitfinex which are now higher than those that preceded the breakout which took us from $4,000 to $5,000. The long positions are now the same as those which preceded the same breakout.

“Bitcoin continues to grind up, without sign of there being any leveraged positions being taken up which implies to me that there is aggressive spot buying in this market, which those shorting it cannot stop. This leads us to a scenario where there will be short positions heavily exposed – around 6k shorts are underwater and at risk of being liquidated.”

This is a bullish scenario according to the analyst who also pointed out that there is a heavy load on the buy side as in previous situations where Bitcoin accelerated to new all-time highs repeatedly in 2017.

Crypto analyst ‘Moon Overlord’ echoes this sentiment with the focus on high number of bids and higher lows for Bitcoin which is strong upwards momentum;

You want to short this be my guest.#Bitcoin | $BTC pic.twitter.com/QTAQUrJe3R

The fabled golden cross is also imminent and this extremely bullish signal could spark off a wave of fomo which sends Bitcoin prices straight up to $6,000 in a matter of hours. Looking at the charts, the crossover of the 50 day and 200 day moving averages is likely to occur today or tomorrow. 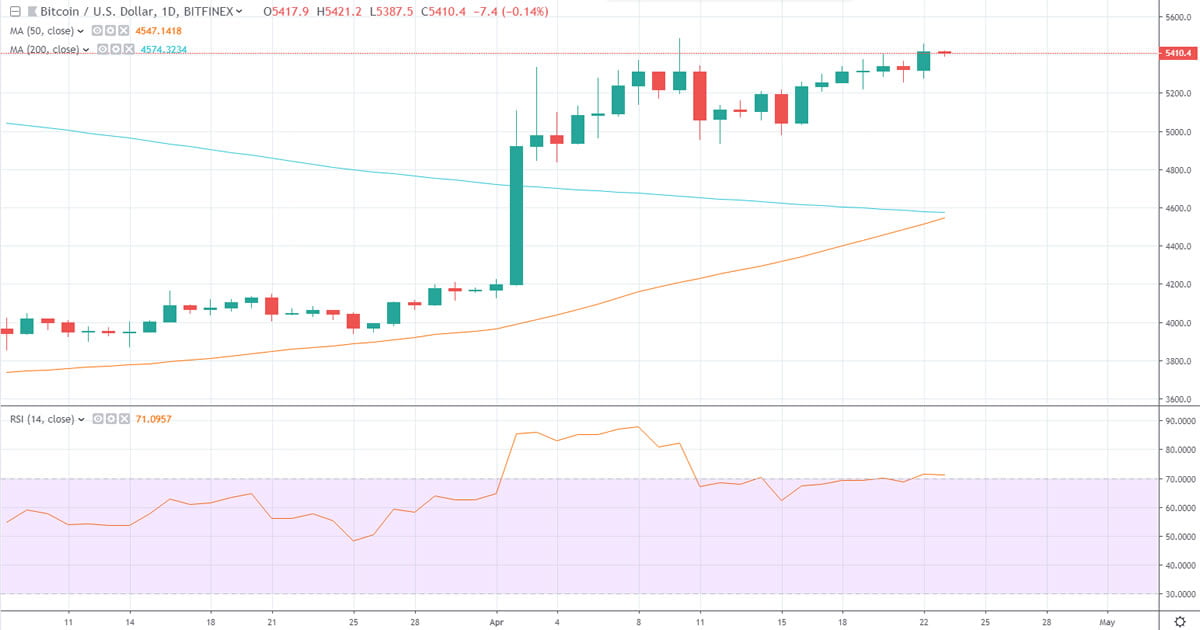 Bitcoin has finally jumped to $5,600 where the 50 week moving average sits – it pulled back from this level pretty quickly as some had anticipated. A break through this also would see a clear path to $6,000 and further liquidation of all of those short positions could send Bitcoin even higher.

These scenarios are purely theoretical until they actually happen but the signals are lining up for Bitcoin and the bulls are poised for action after a long cold spell in crypto land.

Bitcoin Hits $5,600 in a Monumental Rally From Technical Perspective, What’s Ahead?