Clearly, Bitcoin is battered. It’s even heavier for CoinBase account holders after their quick reminder that they are holding Fake Bitcoins. Proof of Coin? All the same, buyers are struggling to create demand, and until after prices race above $3,800, we shall maintain a neutral stance.

From podcasts and interviews, it’s clear that Jack Dorsey, the co-founder of Twitter and the brains behind Square is an avid Bitcoin supporter. He remains adamant that despite slow main-chain throughput, Bitcoin will probably be the native currency of the internet. Bitcoin, as we know, is a public chain and has the direct endorsement from the US SEC. Therefore, the coin is a utility, and no one has direct control of its price.

Besides, it acts as a base for most altcoins meaning entry mandates ownership of Bitcoin. Identifying this gap, Jack through Square’s Cash App continue to earn spreads from users willing to buy BTC off their bank accounts. Aside from this, he is one of the many investors of Elizabeth Start Lightning Network.

Though it’s in beta, LN is a success, drawing in users and increasing in capacity—roughly at 650 BTC at the time of writing. However, Jack’s Cash App is working on allowing users to receive BTC from third-party wallets like CoinBase where he thinks owners with their stash at CoinBase have “fake Bitcoins.”

Working on it. But you’ll need to keep coinbase to buy fakebitcoin 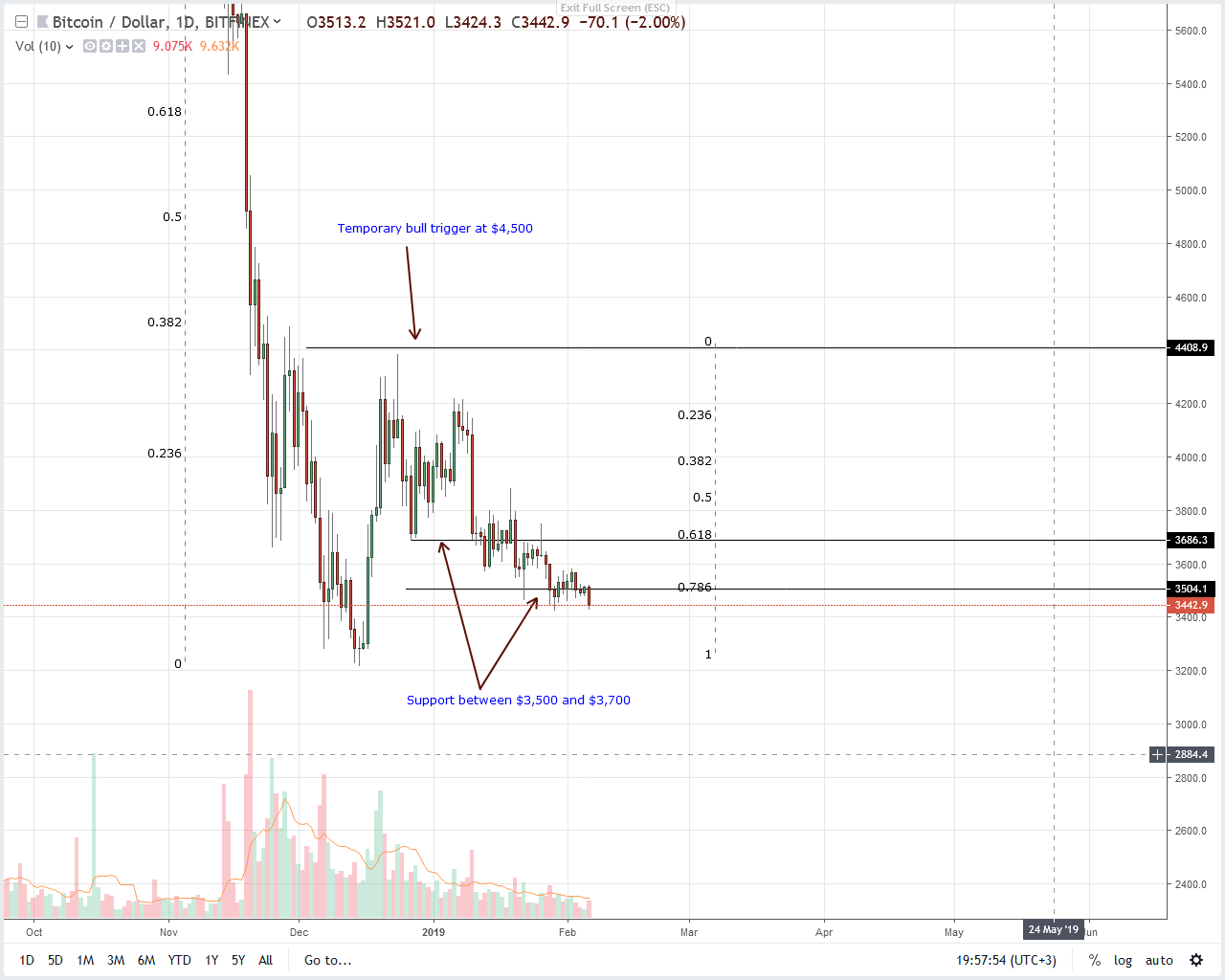 Meanwhile, BTC is on the verge of capitulation. It’s trending precariously at Jan 2019 lows though with low volumes–positive for buyers. All the same, bears will be in control if there is a confirmation of that bar.

Once that prints out, we shall have every reason to recommend a flight to safety—meaning USDT, PAX or any other supported stable coin. It is so because it is likely that BTC will cave in, retesting lows of Dec 2018 at $3,200 consequently invalidating our previous BTC/USD trade plan.

Despite the risk of collapse, trading volumes are thin and tapering. Averages are around 10k, and for confirmation of Jan 28-30 Evening Star pattern, there must be a spike of trading volumes. Ideally, these volumes should print above 20k of Jan 28 and even 35k of Jan 10. That will be the only indicator of market participation. Otherwise, bears would still have the upper hand on BTC prices.