Chinese traders are back. Thanks to OTCs and stable coins, traders can by-pass trade restrictions but at a premium. Overly, their involvement hints of bulls. Because of clear breakouts, it is likely that Bitcoin (BTC) would surge to $6,000.

In China, engaging in cryptocurrency trading is illegal. However, citizens can be holders of the world’s most coveted digital asset. It is now emerging that despite the obstacles placed by the restrictive government, savvy Bitcoin enthusiasts can still invest and profit from the asset’s fluctuation.

To do so, CN Ledger, a Twitter user, says that most do buy stable coins as USDT and later convert them into Bitcoin and other cryptocurrencies via the OTC market. The demand for the stable coin force traders to buy BTC at a premium since OTCs avail USDT at 7 CNY against the normal 6.7 CNY against the USD.

The blanket ban on cryptocurrency trading and investment in ICOs did cut out liquidity from tech-embracing Chinese audience attributed to the first pump that saw Bitcoin prices rally from cents to above $1.

Aside from their involvement, Chinese miners play a crucial role in securing the network. As such, the revelation that they are exposed mean the demand of Bitcoin is real. Because of this, prices will likely print higher in days ahead. After all, Paul Schmidt, a renowned technical analyst expects another wave of higher highs to thrust prices towards $10,000 or higher in coming weeks. 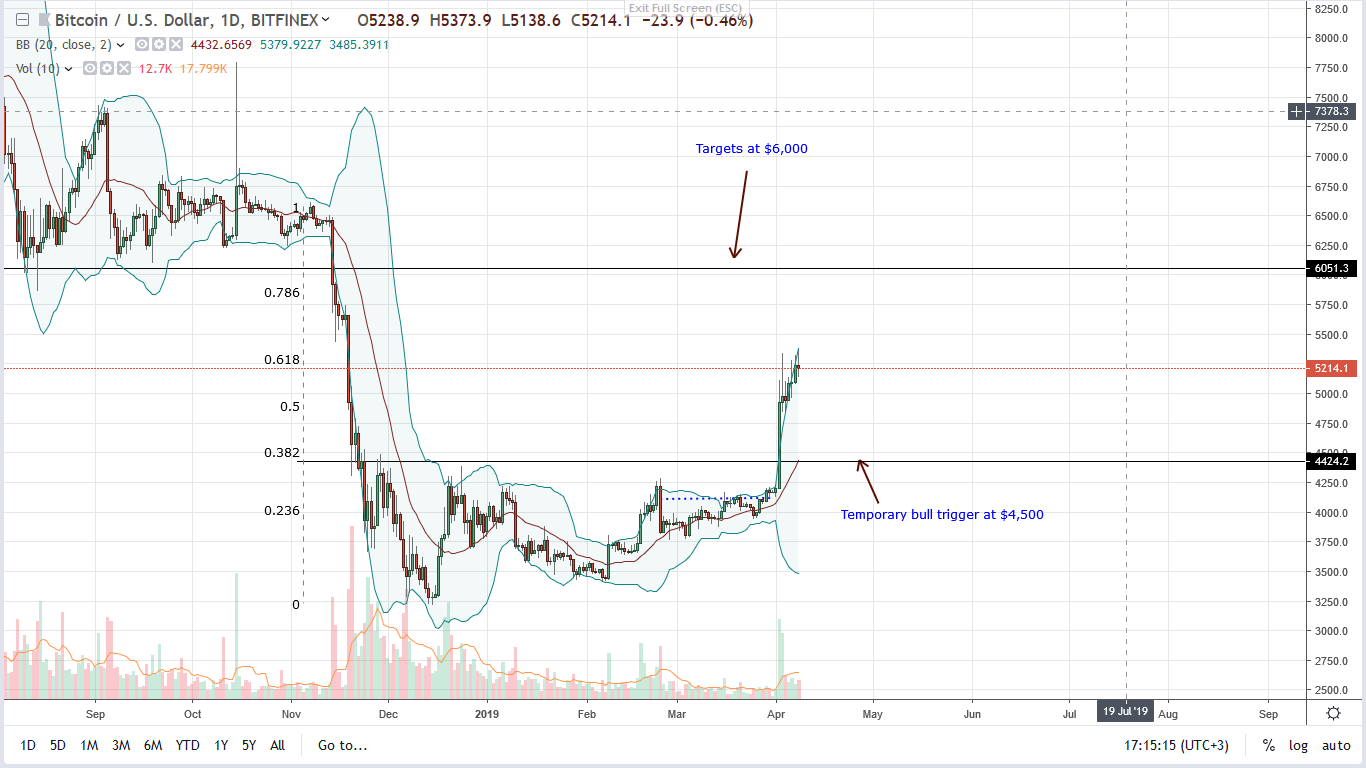 All the same, while there is excitement that citizens from the second largest economy are investing in Bitcoin, it appears as if upside momentum is waning. At the time of press, Bitcoin (BTC) is up 25 percent from last week’s close but stable in the previous day.

After last week’s steady gains, bulls could slow down allowing for a natural correction back to $4,700—$5,000 zones. That pullback shall allow traders to ramp up, feeding the next wave of higher highs towards $6,000—our immediate resistance level.

After all, the trend is clear, and Bitcoin (BTC) is trending within a bullish breakout pattern after closing above the 5-month resistance trend line visible in the weekly chart.

Last week’s volumes were humongous—153k against 78k averages– and found our trade inclination. However, in the daily chart, volumes are thin and shrinking. But unless otherwise, prices drop with equally high transaction levels exceeding 54k of Apr 2, we shall maintain a bullish outlook with targets at $6,000.

HTC’s Blockchain Lead: Bitcoin is to Facebook Coin, JPM Coin as The Internet is to Intranets