Bitcoin Fake Volume Imbroglio Heats Up: Is This Where Industry Really Grows?

Crypto, much like every other modern industry, is as competitive as a grade eight soccer championship. Case in point, much of this industry is based off which project is best. Bitcoin or Ethereum, Dash or Decred, and so on and so forth. Messari, a New York-headquartered market data provider/analyst group, continued this long-standing theme on Tuesday, with its chief executive punching up in a scathing newsletter.

Over recent days, there’s been a hubbub of discussion about the legitimacy of what data services feed investors. Some of these sites are known around the globe — CoinMarketCap (CMC), for instance, is a top 500 site on Amazon’s Alexa — but Messari’s Ryan Selkis argues that something doesn’t sit right with him about their data.

Under his known pseudonym, Two-Bit Idiot, the crypto insider explained that while CMC has done a good job for most of its lifespan, it’s “data is [mostly] wrong.” Selkis compares data seen on his site, predicated on delving into supply cap nuances, false exchanges/volumes, and other caveats, and that registered by CoinMarketCap.

To back his point, the Messari chief draws attention to Bitcoin’s ticker on CMC, which purportedly doesn’t account for the Bitfinex premium. He also looks to CMC’s supply reading for both XRP and XLM, which are purportedly overstated due to treasuries held by institutions, namely Ripple Labs and the Stellar Development Foundation. Selkis adds that trading volumes for some cryptocurrencies “are inflated by 20-50x,” hinting at recent reports that trading activity in this market, by and large, is entirely fake, manipulated, or something of the sort.

Two-Bit then draws attention to a time that CMC’s ad provider/service placed a blatant BitConnect ad on its front page, writing that “CMC was built on the back of ICO mania, and a number of scams who advertised on their site.”

And with that, he explained that with Messari’s “Real 10 Volumes,” an initiative created to single out the bonafide exchanges from the bad actors, and other programs from other data providers, a proverbial fire will be lit under CMC’s rear-end.

But what’s this long, extensive rant all about? And, more importantly, should it be something we should heed?

As hinted at earlier, Ryan Selkis’ tirade comes as a damning report was published by Bitwise Asset Management, a San Francisco-based crypto-centric services provider that is looking to launch a crypto-backed exchange-traded fund (ETF). Per our previous reports on the matter, Bitwise writes that while many expect for Bitcoin markets to be “uniquely orderly and efficient, with tight spreads and nearly perfect arbitrage,” this is far from the case.

Through a slide deck, Bitwise reveals that this explains that this budding ecosystem is often disjointed, with there being great discrepancies in exchange prices. And this is purportedly for good reason. As explained earlier, volume readings posted on “data aggregators” could be 95% false “and/or non-economic in nature.”

To back this harrowing noticing, Bitwise draws attention to “suspicious exchanges,” such as the little-known CoinBene, which registered almost half a billion in Bitcoin volumes earlier this month.

CoinBene purportedly utilizes “trade printing” between the bid and ask prices, hinting that there could be a bot behind much of the trades. In another case, a platform known as RightBTC had a number of periods, which extended to “multiple hours and days,” that had zero volume, even though it claims to have “roughly 4x the volume of Coinbase Pro.” Lastly, it calls on CHAOEX, which sported trading periods that looked extremely “monotonic.” 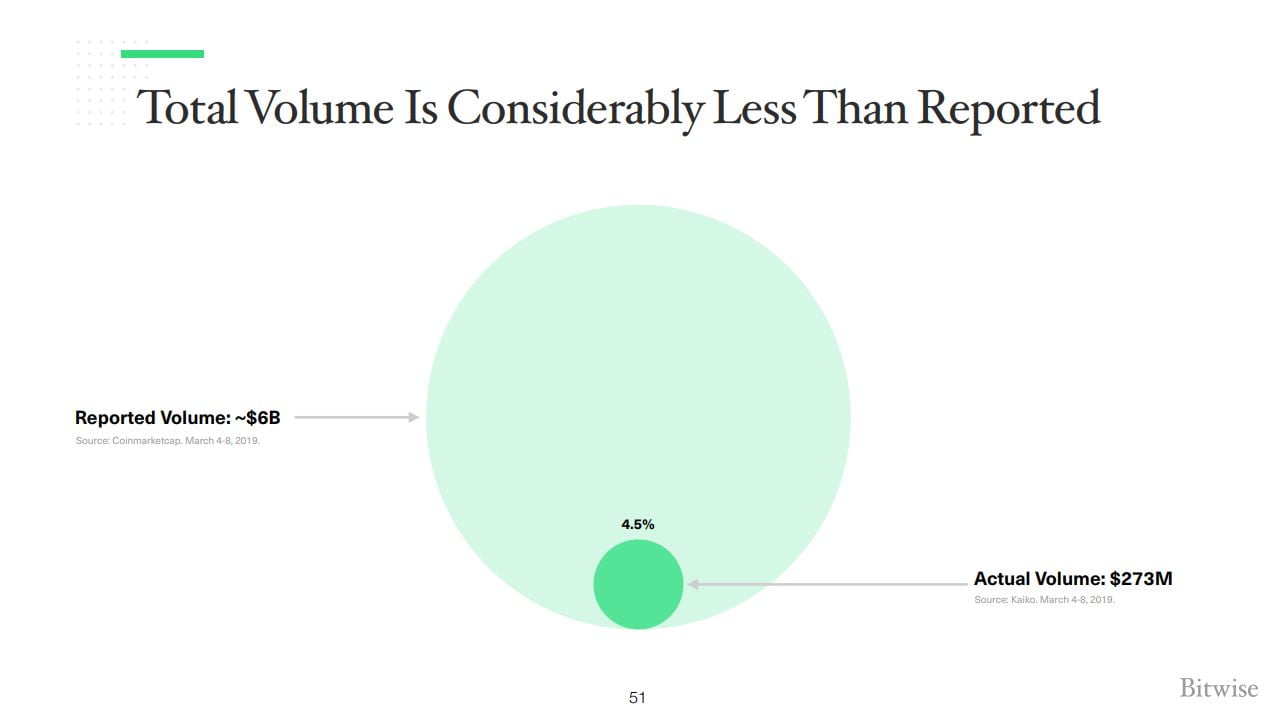 All this, coupled with analysis of trade size histograms, volume spike alignment, and spread patterns led Bitwise, which compiled data from 81 exchanges, to claim that more likely than not, nearly all Bitcoin trading volumes aren’t bonafide.

While many sites have been reporting such volumes, as CMC is the market leader, it sought to respond. In a statement to Bloomberg, Carylyne Chan, CoinMarketCap’s global head of marketing, explained that fears about false volumes “are valid.” As such, Chan explained that the firm will be adding more tools, namely liquidity gauges, exchange wallet balances, and traffic figures, to give the site’s millions of daily users (the site is a top-500 webpage) a better way to determine the actual standing of this budding market.

Many have been pleasantly surprised by CMC’s rapid response, but some fear it is a little too late. NewsBTC’s Dalmas Ngetich argued yesterday that the 95% figure mentioned by Bitwise could hurt crypto’s reputation in governmental circles, like with the U.S. Securities and Exchange Commission (SEC). Others claim that whether it affects ETF proposals or not, it curbs the (already waning) credibility of this industry, as a number of mainstream media outlets reported on this with eye-popping headlines.

The post Bitcoin Fake Volume Imbroglio Heats Up: Is This Where Industry Really Grows? appeared first on NewsBTC.