The bitcoin price is down over 74 percent from its record peak near $20,000. But that has not deterred institutional investors from strengthening their bullish positions in the market. The sentiment has led the world’s largest crypto asset investment firm to notch a record capital inflow this week.

New York-based Greyscale Investments, a division of Digital Currency Group, brought in over $20 million in total investments, according to a statement issued by CEO and Founder Barry Silbert. The said uptick marked Greyscale’s best week since 2017 and pushed the firm’s assets-under-management worth to circa $1.21 billion.

BIG week for @GrayscaleInvest -> we raised over $20 million into the Grayscale family of funds, our highest week since 2017

The investment followed a shift in trading sentiment in the bitcoin market. Upon establishing a so-called bottom towards $3,100 in December 2018, the bitcoin price corrected up to 70 percent in the positive territory. It eventually settled for a new 2019 high towards $5,650 on April 23, only to correct laterwards and establish a session low towards $4,963.

Greyscale Bitcoin Trust BTC (OTCMKTS: GBTC), one of the nine cryptocurrency products offered by Greyscale, noticed a 7.79 percent decrease in Short Interest (SI). According to FINRA, GBTC’s total SI was down to 11.11 million from 12.05 million shares. Such a drop typically means that investors have become decently bullish, and the price may be due for a reversal to the upside. Nevertheless, GBTC decreased 0.70 percent during the April 26 trading session, much in line with the bitcoin spot market’s session performance. 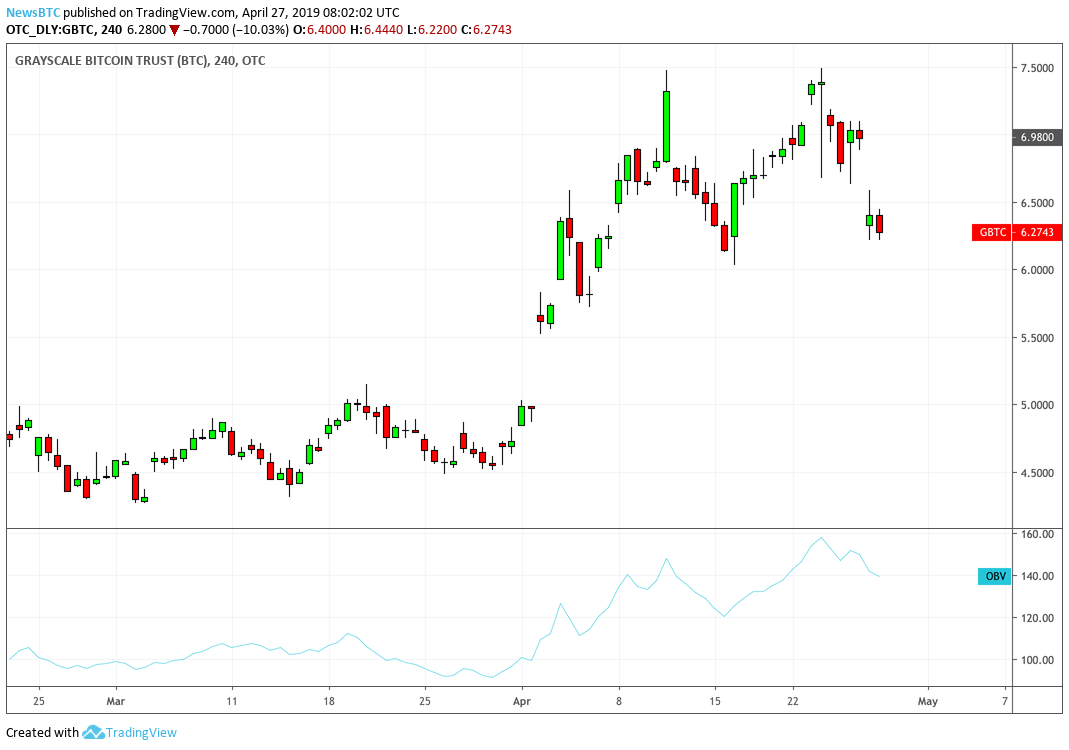 Strong asset inflows in the medium-term indicate that institutional interest in bitcoin is emerging again following the 2018’s decline. Greyscale’s clientele includes hedge funds, pensions, endowments, family offices, and high net-worth individuals – and their interest in GBTC, which represents the ownership of bitcoins held by Greyscale, show a stronger bullish bias for the asset.

The shift came amidst institutions’ uncertainty of the cryptocurrency market’s future. Security, lack of regulations, and news of fraud were the main obstacles. But with big names in the mainstream financial industry building a crypto-enabled infrastructure, the fears are dropping down. It is already visible in bitcoin’s impressive performance in 2019.

Yale and Harvard’s endowment funds have invested in at least three venture capital funds that deal in cryptocurrencies. Fidelity and Nasdaq have also entered the market with several partnerships and cryptocurrency ventures.

As The Digital Dust Settles, Where Will Crypto Markets Go Next?