Although prices are down, sliding from $5,500 after peaking mid this week, candlesticks, as well as fundamental factors, favor Bitcoin (BTC) bulls. One Twitter user projects BTC to hit $98 million in two decades.

For speculators, everything is about price. Pricing dominate and with fluctuating crypto assets, traders have a home in crypto. Analysts have on numerous occasions aired their two cents. Most are optimistic that Bitcoin as a problem-solving network whose native coin is shaping the financial landscape is here to stay. As a result, they interpret value and a possible undervaluation. Their ballpark estimation of what BTC would be in say five or ten years is around the $50k mark. However, there is a new breed of believers who after their analysis think that Bitcoin—and in that case liquid asset—are grossly undervalued.

One of them going by the Twitter handle, Moon_Rekt project Bitcoin to surge to $98 million in a record-breaking 20 years. Affirming his projections are a combination of several factors including the role of hodlers, the increasing scarcity of the world’s most valuable asset and then next years’ halving that will see miner rewards drop by 50 percents.

1/ This thread will explain why Bitcoin will become the first world currency worth ≈ $98 Million USD per Bitcoin (in today’s dollars).

Adding that are the advantages of Bitcoin and all other blockchain networks. Some of them include the security, fungibility of prices not content of block and then divisibility of an asset which places it above Gold, whose market cap is around $7.7 trillion. Once high net-worth players begin shifting from Gold as a store of value to Bitcoin taking advantage of what the network has to offer, the optimistic holder expects BTC to soar. 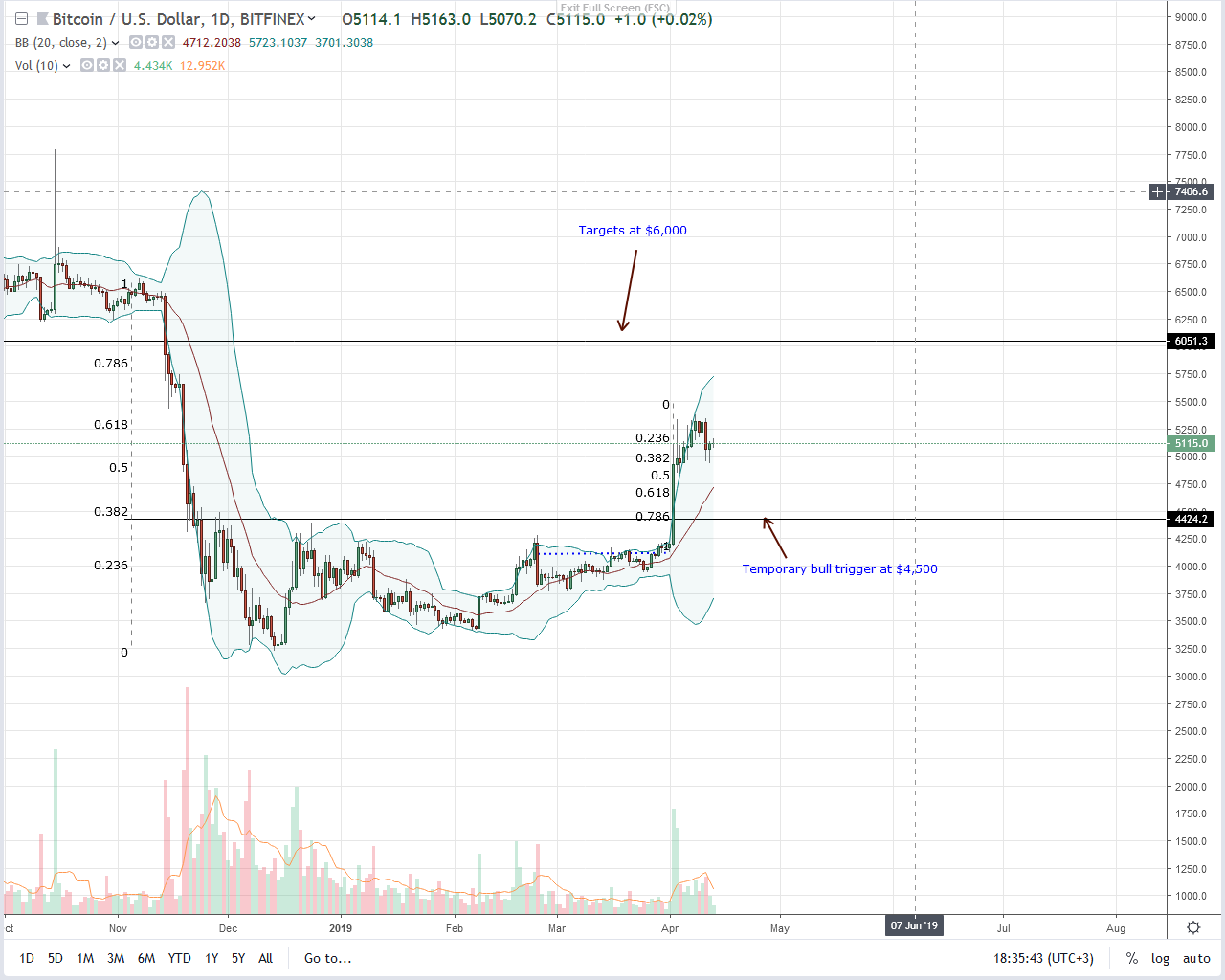 After two weeks of above-average gains, Bitcoin (BTC) is slowing down, up 0.6 percent in the last day. However, what is encouraging is the reaction from $5,000 and rejection of lower lows. From the charts, it is clear that our previous BTC/USD trade plan is valid.

As a result, every low is technically another buying opportunity. In that case, both sets of traders should take advantage of positive sentiment and favorable candlestick alignment to load up with aggressive participants taking at spot rates with stops at Apr-11 lows at $4,900—data streams from BitFinex.

In line with current developments and risk of lower lows, Apr-12 bear bar anchors our analysis. With light volumes—19k against 21k average, Bitcoin (BTC) bulls will be back in contention as risk-averse traders flow in once prices rally past $5,500 with volumes exceeding 19k.

The post Bitcoin (BTC) Sentiment is Bullish But is $98 Million Even Possible? appeared first on NewsBTC.