Bitcoin (BTC) Prices Down but Low Volumes above $3,800 Mean Bulls

By removing crypto support, Bitcoin adoption is taking a hit and partly fueling the current price meltdown. At this rate, it is likely that Bitcoin will retest $3,800, but that is dependent on participation levels.

Twitch, streaming service owned by Amazon has silently removed Bitcoin as subscription payment options for their global audience. By 2018, the company had more than one million users on average and over 2.2 million broadcasters. Before this change, Twitch users could pay for their subscription using Bitcoin (BTC) through BitPay.

Coincidentally, this decision come days after another Redditor noticed that Streamlabs upgraded and their new version doesn’t support cryptocurrencies. So far, there has been no official comment from Twitch explaining their decision.

Regardless, some users were angered and resorted to canceling all their subscription. Their frustration is reasonable. Twitch and Streamlabs had a fruitful synergy, and the popularity of the latter skyrocketed when a broadcaster received $70k in Bitcoin donations on Jan 12, 2019.

However, commentators are speculating that low volumes could be a reason why. Another argument could be the lack of smart contract capability within the Bitcoin blockchain that allows for schedule payments like those common in custodial wallets as PayPal. 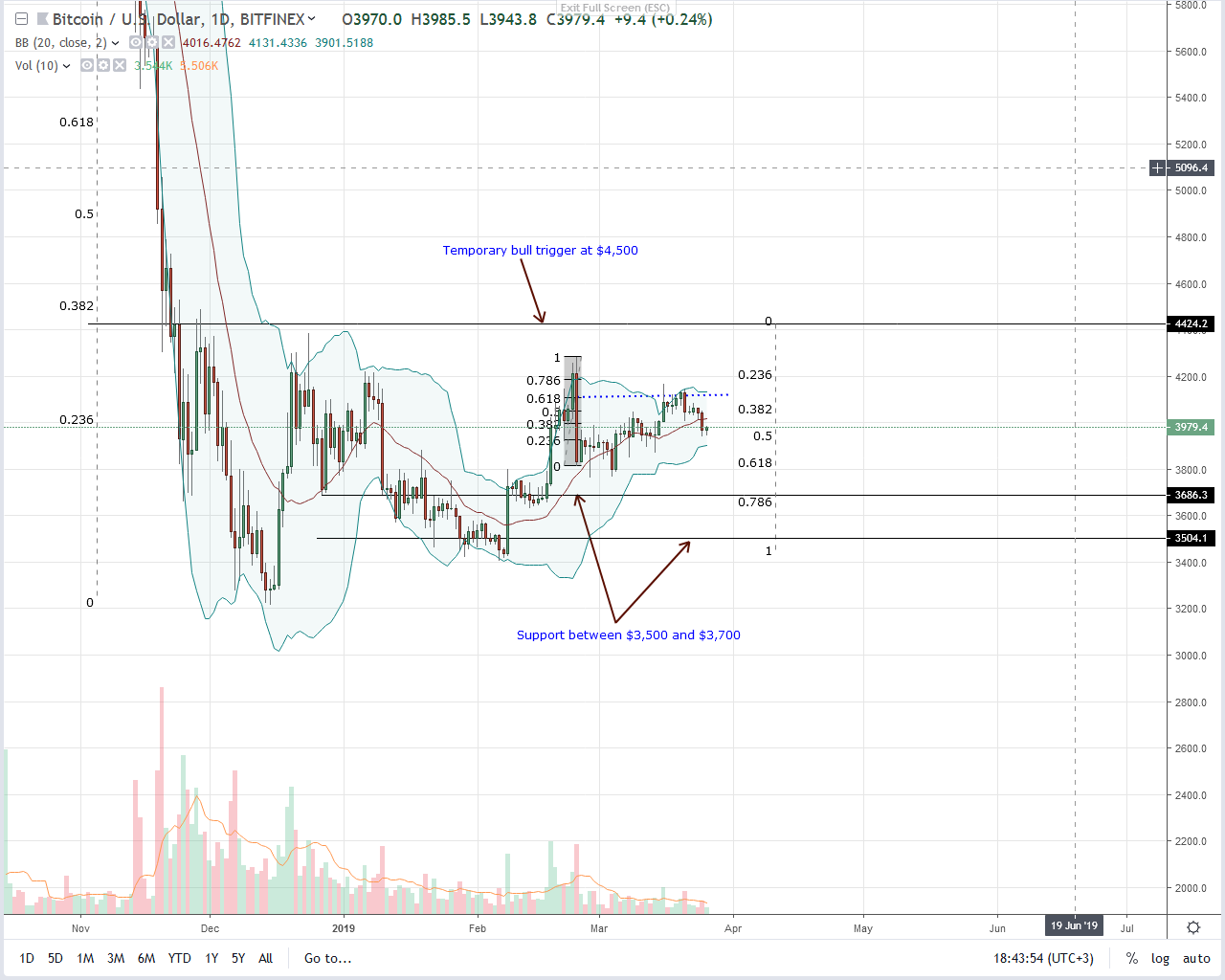 After a stellar first half of Mar 2019, bears are back, and assets are back to red. At the time of press, Bitcoin (BTC) is down 1.3 percent and trading within a three-bar bear reversal pattern near our anchor bar’s highs.

Because of yesterday’s draw-down, BTC is melting, and bulls are at a disadvantage and unlikely to reverse losses of Feb 24. Therefore, at this pace, it is likely that prices will trend back to $3,800, our breakout level.

As such, the complete reversal of Mar 21 gains and a close below the flexible support line in the 20-day MA means sellers are in control. In that case, we suggest exiting longs as bears step up with the first level of support expected at Mar 5 lows at around $3,800.

Despite these lower lows, we are optimistic that prices will recover thanks to low volumes accompanying the drawdown. Note that Mar 25 bar was bearish but with low volumes at 6.9k. That is more than half that of Mar 16 at 13.9k. Even so, the dominant trend must have high volumes and if today’s bar closes a bear with increasing volumes, odds are BTC will sink to $3,800 as sellers of Feb 24 flow back heaping pressure on the asset.

The post Bitcoin (BTC) Prices Down but Low Volumes above $3,800 Mean Bulls appeared first on NewsBTC.

Another Hack Coincides with Ethereum (ETH) Price Drop, Back to $100?