Analysts are optimistic of Bitcoin (BTC) price recovery with Brendan Bernstein pointing to supportive fundamentals. At the same time, Josh Rager preview place Bitcoin at over $150k after 2023. All the same, Bitcoin prices are up 3.6 percent in the last week and look likely to reach $4,500 by end week.

The co-founder of Tetras Capital, Brendan Bernstein, believes that over the long-term, Bitcoin could outperform other digital assets. Propped by supportive fundamentals as well as increasing adoption levels, Bitcoin (BTC) prices could rally from spot rates to upwards of $130,000 if an analyst’s preview is anything to go by.

Citing the cyclic nature of all markets, Bitcoin rise—despite last year’s crypto winter, is parabolic complete with dips that only correct higher from previous lows. The crypto-analyst, Josh Rager, concludes that it takes 574 days for peak retests.

The next Bitcoin cycle should peak out in July 2023 and could reach a price at $150,000 or more per Bitcoin

Therefore, regarding Bitcoin whose prices peaked in late 2017, bulls could retest 2017 peaks by 2023 or sooner. After that, his projection places Bitcoin prices at $150k. Even though it may appear “dreamy” we realize that the US SEC may approve the first of its kind Bitcoin ETF after there is public confidence on exchanges notorious for manipulation prices as well as Bitcoin halving set for May 2020.

Resulting scarcity will support prices thanks to demand-supply dynamics. Add that to increasing UTXO within the Bitcoin network, and all pointers indicate an accumulation. 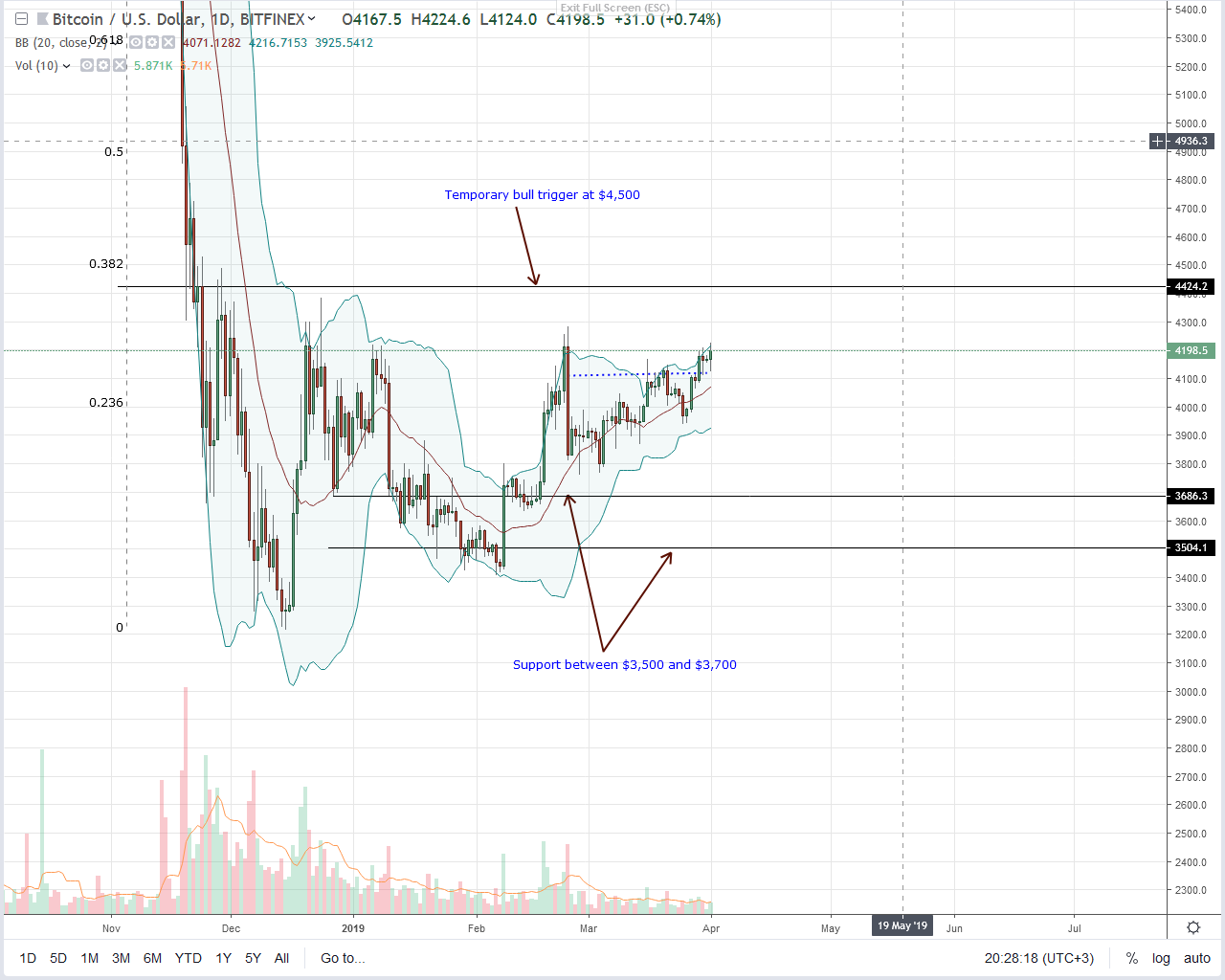 After three months of accumulation, Bitcoin (BTC) prices are edging higher. Not only is BTC up 3.6 percent at the time of press but prices are firm above Mar 16 highs.

That’s not all. From BB arrangement, it appears that the underlying momentum is strong as today’s long lower wick hints of increasing demand thrusting prices higher as bull bars band along the upper BB.

Because of our previous trade plans, risk-off, aggressive traders should search for under-valuations in smaller time frames and ramp up with first targets at $4,500. The level is previous support now resistance representing the upper limit of the $1,300 trade range whose base is at $3,200 or Dec 2018 lows.

Note that prices are up. However, it is after a strong breakout print above Feb 24 highs that risk-averse traders can search for entries. It’s easy to see why. Feb 23-24 is a classic double-bar bear reversal pattern with high transaction volumes. Ideally, Bitcoin (BTC) reversing these losses must exceed 36k of Feb 24 and 37k of Feb 18 confirming the double bar bull reversal patterns of Feb 7-8 and Mar 4-5.

Ripple (XRP) In a 4 Cents Range Since Dec, When Will Bulls Break Out?