Wall Street leaders like Fidelity are investing and participating in infrastructure development squashing claims that Bitcoin and Blockchain are just but “Fool’s Day Joke.” Meanwhile, Bitcoin (BTC) is firm above $5,000 and bulls now aim at $6,000.

Unlike JP Morgan’s Quorum protocol, Bitcoin is free, permissionless and open source. That means any developer from any part of the world can analyze the network’s modus operandi, suggest improvement proposals and even offer support. By running a full node, he or she will be decentralizing the system making it censorship resistant further making the network more valuable. To quantify how valuable the protocol, at the time of press, Bitcoin market cap stood at $90,913 million, up 25 percent, after an impressive week.

I can’t respect any publication that is still calling Bitcoin a bubble. Even if it was a bubble last year, I’ve never seen a bubble pop twice!

Despite what Bitcoin represents and the founder’s intention of converting Bitcoin not only as a medium of exchange and a store of value but also as a settlement layer, mainstream media continue to ask hard but often discrediting questions. Just the other day, Motley Fool, a US publication asked a simple question: “Is Bitcoin just a big April Fool joke?” While legit as it is, the author kept on recycling old questions.

Bitcoin is a solution that depends on the blockchain, technology governments as well as big corporations—that Motley Fool diehards have their faith in—are bullish on and heavily invested. So whether it is a bubble, calmed after Fool’s day or lack intrinsic value, the technology is here to stay, and the underpinning technology is already shaking the status quo. 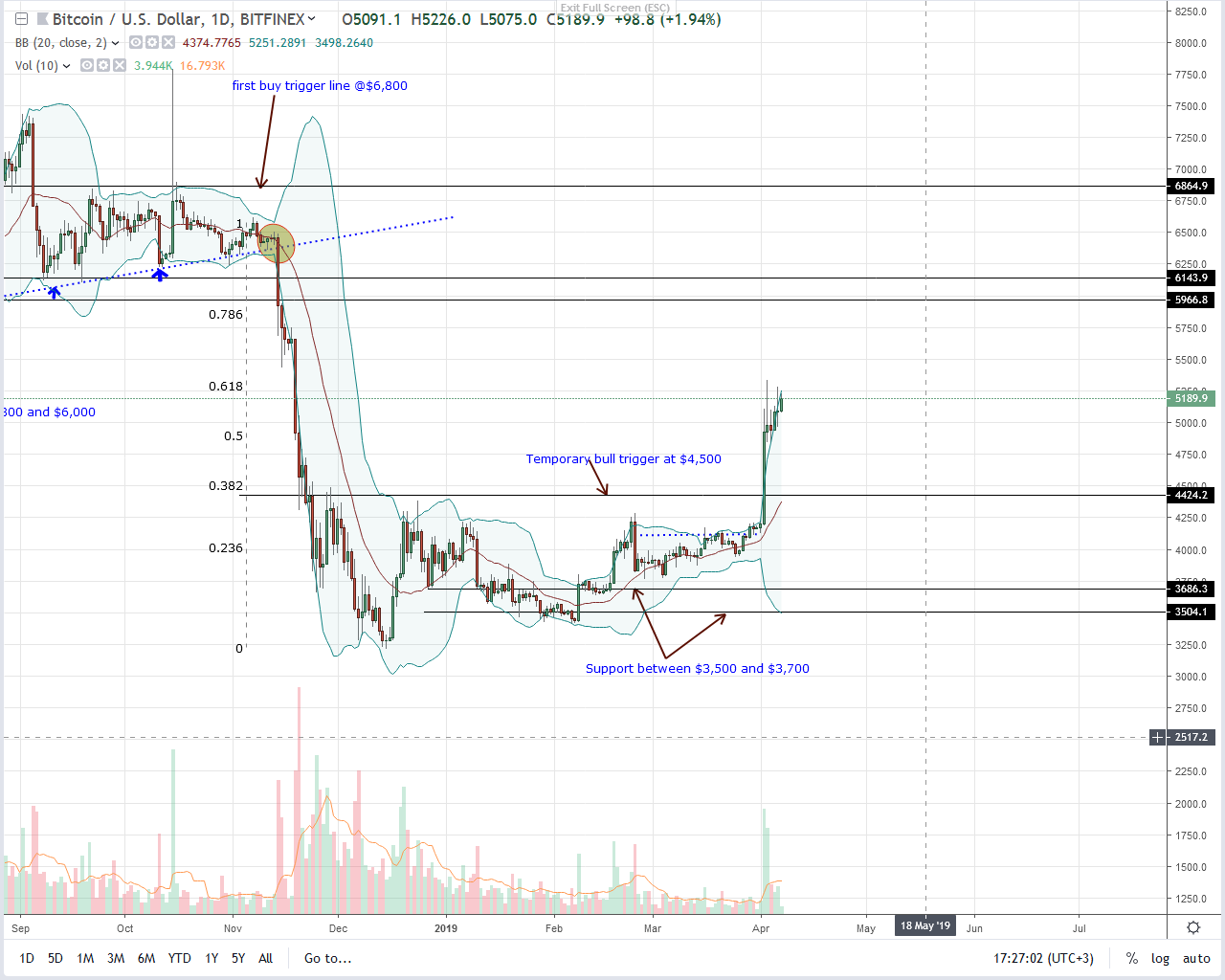 Up 2.9 percent in the last day, Bitcoin (BTC) bulls are firm and unless there is a fundamental event, it will most likely close as a bull. As a result, the path of least resistance is clear, and BTC traders can as well trade in line with all of our previous trade plans, loading up on dips in smaller time frames with the first target at $6,000.

To reiterate our stand, BTC is trading within a bullish breakout pattern, visible in the weekly chart. Therefore, long as bulls maintain prices above $5,000, we expect the trend to continue. Undoubtedly, increasing buy momentum would likely reverse Q4 2018 losses. However, it is after BTC bulls break above $6,000 they will be free allowing unrestricted flow towards $8,000 or higher.

Expectedly, participation is dropping after Apr 2 upswings, but prices are aligning themselves along the upper BB meaning buyers are in control. Any break above $6,000 must be with high volumes exceeding 54k of Apr 2.