Jaguar announcement did stimulate IOTA bulls. At spot rates, IOTA is up 14.6 percent complete with high volumes, three times the average. Even so, IOTA is technically bullish after late Dec 2018 events thrusting prices above a seven-month resistance trend line.

There is a re-awakening and leading the charts is IOTA, a coin whose founders say will power the world of IoT. However, it has not been like this. Before this announcement, the currency was a bottom feeder, low in volatility and retesting Q1 2019 lows.

Affirming this lack of activity and missing investor confidence is low Sentscore as relayed by Predicoin. At 4.1, the coin has been propelled to the limelight thanks to increasing social media searches and a spike a deluge of Jaguar triggered IOTA related news pieces.

As investor confidence increase thanks to the expansion of prices in the last 36 hours, we should take note that the direct correlation between price and sentiment would likely lift the asset prices in the next few days.

That is despite lagging technical indicators printing a value of 2.5 at the time of press revealing that momentum indicators are signal bulls. With the new partnership, drivers willing to share their data will receive IOTA rewards.

Besides, Jaguar said they are developing a smart wallet for drivers who will automatically switch to auto, allowing Jaguar to collect traffic or other useful data as they move towards their objective of “achieve zero emissions, zero accidents, and zero congestion.” 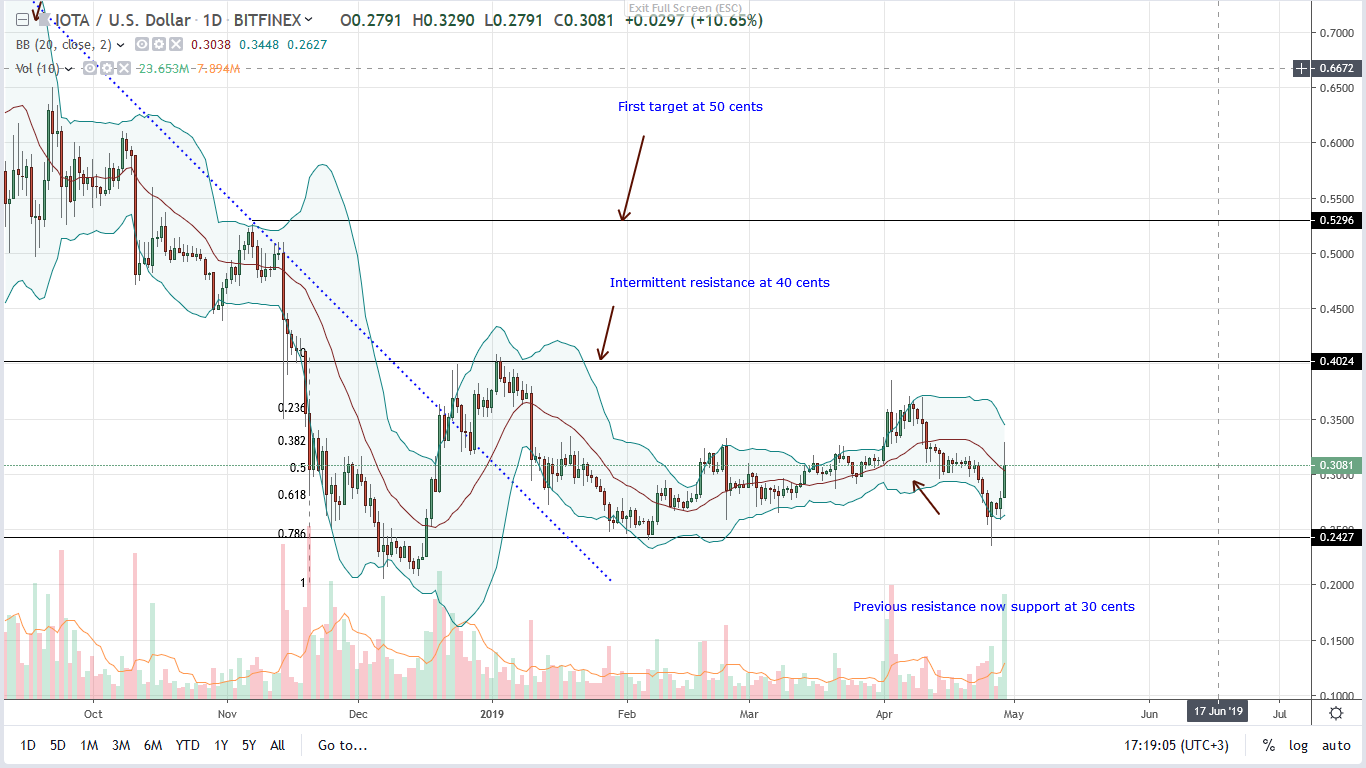 At the time of press, IOTA (IOT) is bouncing off Q1 2019 support line at 25 cents and up 14.6 percent in the last day. Technically, this is bullish and confirm the bullish breakout trade of late Dec 2018. Then bulls rallied above the seven-month resistance trend line.

Even so, there has been no confirmation. Instead, IOTA prices have been ranging within a 15 cents range with caps at 40 cents and 25 cents as the lower limit. Therefore, since prices are bouncing off the 78.6 percent Fibonacci retracement level of Dec 2018 high low, sustained bull momentum would see IOTA hit Dec 2018 highs at 40 cents.

After that, if there is a wide-ranging bar driving price above 40 cents, a resistance level, then prices will likely test 55 cents or higher.

There is a surge in transaction volumes—18 million. Since it is above the average of 5.7 million, risk off, aggressive traders can buy on dips with the first target at 40 cents as aforementioned.

Bitcoin and Crypto Investors Are Torn Over Using Bitfinex After Accusation